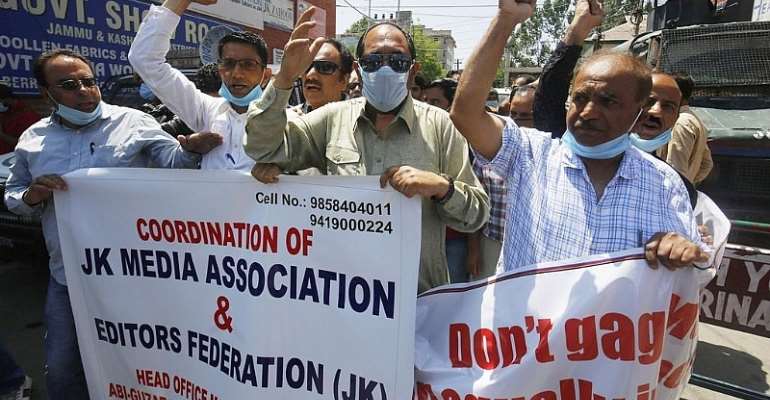 Journalists in Indian administered Kashmir have protested against a controversial media policy introduced last week and are demanding its immediate rollback.

It gives the Department of Information and Public Relations (DIPR) of the state administration the authority to monitor media outlets and journalists in Kashmir for misinformation, fake news, plagiarism and anti-national activities.

The DIPR also will determine who is “impanelled”, or accredited, and will control allocations for government advertising.

Journalists in the Kashmir Valley were expectedly riled by the decree and protested at the winter capital Srinagar's Lal Chowk, carrying banners that read “Don't Gag Media” and “Down with Media Policy 2020”.

“Under this stifling policy, before publishing any article, we have to report to the government to take their permission,” Rashid Rahi, President of the J&K Editors Association told RFI. “It is a threat to journalism in Kashmir,” he said.

“The new media policy is clearly aimed at gagging freedom of press. Media persons in Kashmir have been reporting facts against all odds and braving tough conditions,” Mir Arshid, general secretary of the media association told RFI.

In the last few months journalists have been summoned to police stations and forced to present themselves to explain their stories.

Photo journalist Masrat Zahra was booked under the Unlawful Activities (Prevention) Act (UAPA), a draconian anti-terrorism law under which a person can be jailed for up to seven years.

Zahra was charged for posting her work on social media – including a photo of a protester with a banner of popular Kashmiri rebel commander Burhan Wani, who was killed in July 2016.

“The trauma continues, but I also don't want to stop working because I think all journalists in Kashmir face such pressures. We have to be ready for it,” said Zahra, whose work has been published by The Washington Post and Al Jazeera.

In another instance police also booked journalist and author Gowhar Geelani for “glorifying terrorism” and indulging in activities deemed “prejudicial to the sovereignty and integrity of India.”

In his plea, Geelani has described the complaint against him as “vindictive and calibrated to wreak vengeance”.

These were not isolated incidents. It followed on the heels of a similar case where the police issued a summons to Peerzada Ashiq, a journalist with The Hindu newspaper.

Ashiq's report was about the family members of two armed militants who were refused the bodies of their deceased kin.

“With this new media policy, we will face increased risks. It is yet another attempt to suppress our voices and prevent the truth from being told to the world,” said journalist Umar Bukhari.

Interestingly, three photojournalists – Dar Yasin and Mukhtar Khan, from Kashmir, and Channi Anand, from Jammu – won the Pulitzer Prize this year for their photographs of Kashmir's lockdown.

India this year dropped two places on the World Press Freedom Index, now ranking at 142 out of 180 countries. Its score is heavily affected by the situation in Kashmir.

After rescinding the state's autonomy in August last year, the federal government completely shut down fixed line and mobile Internet connections for several months, making it virtually impossible for journalists to cover what was happening in what has become a vast open prison.

The new media policy has only added to their pressure.