Eight Chadian soldiers killed by mine in jihadist area

By Ali Aba Kaya with Joseph Sotinel in Libreville 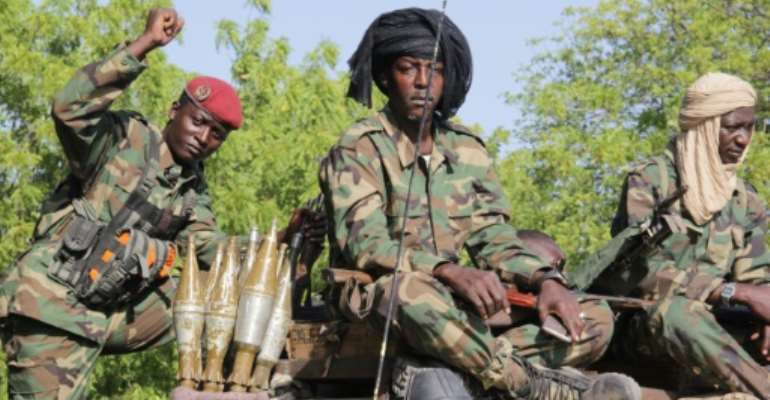 At least eight soldiers in western Chad were killed and many others wounded when their vehicle struck a landmine laid by suspected jihadists, security sources and a local official said Thursday.

The blast occurred on Wednesday at Kalam in the Lake Chad region, which has been battered by attacks from jihadists crossing from neighbouring Nigeria.

The sources, speaking on condition of anonymity, put the toll at eight or nine dead and between 11 and 21 wounded.

A security source in Nigeria also gave the figure of nine dead and said the device had apparently been laid by the Islamic State West Africa Province (ISWAP), a splinter group of Nigeria's Boko Haram.

One of the fatalities was a commander in the gendarmerie, the Chadian military source said, adding that exchanges of gunfire broke out later Wednesday between troops and jihadists in Bakaram, in the same region.

Boko Haram's insurgency, launched in northeast Nigeria in 2009, has killed more than 36,000 people and displaced more than two million from their homes.

The violence has spread to neighbouring Niger, Chad and Cameroon, prompting the formation of a four-nation anti-jihad coalition, the Multinational Joint Task Force (MNJTF), of which the Chadian army is a key component.

In March, Chad's armed forces suffered their biggest single-day loss, when 98 soldiers were massacred in their base at Bohoma, on the banks of Lake Chad.

The Lake Chad region, shared by Niger, Cameroon, Nigeria and Chad, has become a battleground in an 11-year-old jihadist insurgency. By SIA KAMBOU (AFP)

In response, President Idriss Deby launched an offensive from March 31 to April 3, declaring at its end that there was "not a single jihadist left" in the Lake Chad region.

N'Djamena claimed a thousand "terrorists" had been killed in the crackdown.

The following month, a video released by ISWAP, authenticated by Chadian officials, showed the execution-style killing of a uniformed Chadian soldier who had been seized in an ambush on April 18.

A Chadian officer, speaking on Thursday, said, "despite the victory inflicted on Boko Haram after Bohoma, we know that Boko Haram can always bounce back quickly, and we already had intelligence that they were present in the area."

Jean Bosco Manga, founder of a Chadian grassroots group called the Citizens' Movement for the Preservation of Freedoms (MCPL), said the latest strike bore out the need for stronger cross-border cooperation.

"This upturn in violence stems from the fact that you cannot claim to defeat an organised sect whose tentacles are in neighbouring countries," he said.

Chad says it has 8,000 troops in the troubled Lake Chad region and has complained that it is shouldering the lion's share of the security burden.

The MNJTF's "offensives have won victories and helped instil an esprit de corps among participating troops," the International Crisis Group (ICG) think tank said in a report on Tuesday.

"But nimble militant factions have regrouped fast, and the MNJTF's effectiveness has suffered from confusion over priorities, the four states' reluctance to cede command to the force itself, and funding and procurement delays."

The insurgency that began in northeast Nigeria is one of two jihadist offensives that have rocked the fragile Sahel.

The other began in northern Mali in 2012, then spread to the country's volatile centre, and into Burkina Faso and Niger.

Thousands of lives have been lost and hundreds of thousands of people have fled their homes, and the three countries, among the poorest in the world, have suffered massive economic damage.

The UN has deployed a 13,000-man peacekeeping force in Mali, while France has 5,100 troops stationed in the Sahel in its "Barkhane" anti-jihadist mission.