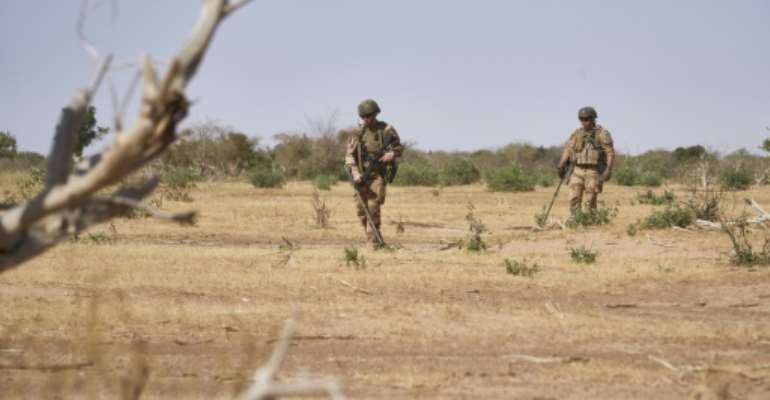 The presence of international troops in Burkina Faso has failed to stop the jihadist and inter-community violence. By MICHELE CATTANI (AFP/File)

The United States on Wednesday threatened to withdraw security assistance to Burkina Faso after reports that the West African country's army was responsible for the extrajudicial mass execution of 180 men.

The bodies of the men, mostly from the ethnic Fulani group, were buried in mass graves by residents of the northern town of Djibo between April and May, a report by Human Rights Watch found.

Many were blindfolded, had their hands tied behind the back and were shot in the head, the report released Wednesday said.

Tibor Nagy, the top US diplomat for Africa, called the HRW report "very troubling" and said that "US security assistance cannot continue without action".

"Burkinabe authorities must do more to prevent these abuses and hold perpetrators accountable," he tweeted.

J. Peter Pham, the US envoy to Africa's Sahel region, echoed the call, tweeting that "without rapid and thorough action, these abuses put the partnership with the US in danger."

Since a jihadist insurgency crossed the border from Mali in 2015, inflaming feuds between ethnic groups on the way, the conflict has killed more than 1,100 people and forced more than a million to flee their homes in Burkina Faso.

The Fulani, a traditional herding community in the country's semi-desert north, have proved a fertile ground for jihadist recruitment.

Over the last three years Burkina Faso's security forces have been repeatedly accused of abuses against the Fulani.

The US embassy in Burkina Faso's capital Ouagadougou said Washington was "deeply concerned by the continued and growing number of allegations of abuse and extrajudicial killings carried about by Burkinabe security forces."

"We strongly urge the government to immediately launch an independent, timely, and fully resourced investigation into these new allegations," the embassy said it a statement.

The US statements did not specify details on the assistance that could be withdrawn, and Burkina Faso's government did not immediately respond.

"Existing information points toward government security forces, so it's critical to have impartial investigations, evidence properly gathered, and families informed about what happened to their loved ones," she said in the report.

Burkina Faso's government had earlier said it would open an inquiry in response to the allegations.

Officials said these executions might have been committed by armed groups who used army uniforms and munitions when they attack, according to HRW.

In a case that sparked outrage against Burkina Faso's security forces, 12 of 25 people arrested on suspicion of terrorism died in their cells in the eastern town of Tanwalbougou in May.

Relatives of the dead, rights organisations and even an MP said that the victims were civilians caught up in a raid and were shot in the head.

Burkina Faso's ill-equipped and poorly trained security forces have failed to stop the spiralling jihadist insurgency, and whole swathes of the country are out of its control.

There are more than 5,000 foreign troops in the country, including from France, while the US provides significant intelligence resources.

Burkina Faso's neighbours Mali and Niger have also been swept up in the jihadist and inter-community bloodshed, which killed 4,000 people across the three countries last year, according to the UN.

The economies of the three countries, already among the poorest in the world, have been very badly damaged.