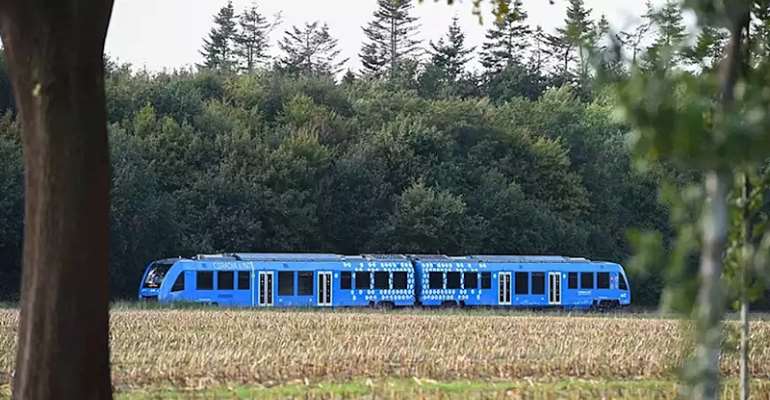 The European Union has pledged to make renewable hydrogen key to its coronavirus recovery and climate ambitions. But producing hydrogen currently relies on fossil fuels – and the EU said it would not set a date to make it otherwise.

With its European Hydrogen Strategy, the 27-member bloc's executive body has put the low-emission energy source at the heart of its ambition to make Europe the first carbon-neutral continent by 2050.

“Most of the energy transfer will focus on direct electrification, but in sectors like steel, cement, chemicals, air traffic, heavy-duty transport, shipping, we need something else,” said Commission Executive Vice President Frans Timmermans. “Clean hydrogen is key for a strong, competitive, carbon-free European economy.”

“We are sending a clear signal to member states, industry and the world that we are determined to transform our energy sector and supporting recovery through clean investments,” said Energy Commissioner Kadri Simson, who presented the plan with Timmermans.

Hydrogen gas ticks many boxes when it comes to meeting the 2015 Paris Agreement climate targets of keeping the rise of average global temperatures between 1.5 and 2 degrees Celsius over pre-industrial levels.

It generates no carbon emissions when burned and it can power hard-to-decarbonise manufacturing and transport industries. Already-existing gas pipelines can be upgraded to transport it.

The EU targets for cleanly produced hydrogen are ambitious: 6 gigawatts of renewable hydrogen electrolysers installed in Europe by 2024, six times what is in place today, followed by 40 gigawatts by 2030.

However, while it is possible to produce hydrogen gas using renewable energy sources, more than 95 percent of it today is produced by high-emissions fossil fuels in a process called steam methane reforming.

“Current production of hydrogen is too fossil-based. It emits 70 to 100 million tonnes of CO2 per year,” Timmermans said. “Our entire strategy is towards supporting clean hydrogen as much as possible and as soon as possible.”

No limit to dependence on fossil fuels

But therein lies the dilemma: the Commission has ruled out pinpointing when “as soon as possible” may be.

“I cannot provide a very precise date when there will no longer be investment” in fossil-fuel-burning infrastructure, Timmermans said. “We will need natural gas, not only for hydrogen, but for energy transition in general.”

“Although the focus is on hydrogen from renewables, the Commission hasn't ruled out that it will be supporting hydrogen produced from fossil fuels,” says Tara Connolly, energy campaigner with Friends of the Earth Europe.

Along with the current reliance on fossil fuels is the risk of falling back on fossil-fuel sources and infrastructure if hydrogen supply does not meet demand.

“If we overestimate the amount of hydrogen that will be available at the expense of efficiency – reducing the overall amount of energy we're using and trying to electrify as much as possible – we risk getting stuck,” Connolly says.

“We're concerned about the overall scale of this compared to the attention given to the technologies we know have to play a central role, namely energy savings and renewable energy.”

Along with the lack of a clear date for ending fossil fuel dependence, campaigners are also concerned about the composition of the Clean Hydrogen Alliance, a group tasked with identifying projects for investment and informing policy decisions.

The group, also launching Wednesday, is composed of public officials and representatives from industry and civil society, with campaigners believing oil and gas companies have far more representation than NGOs and renewable energy groups.

“The list of who was invited to speak at the launch was really a who's who of the fossil fuel industry,” Connolly says.

“That's been changed now, there will be two representatives of NGOs and someone from Solar Power Europe, but that's only come after some protest and concerns being raised on our part.”