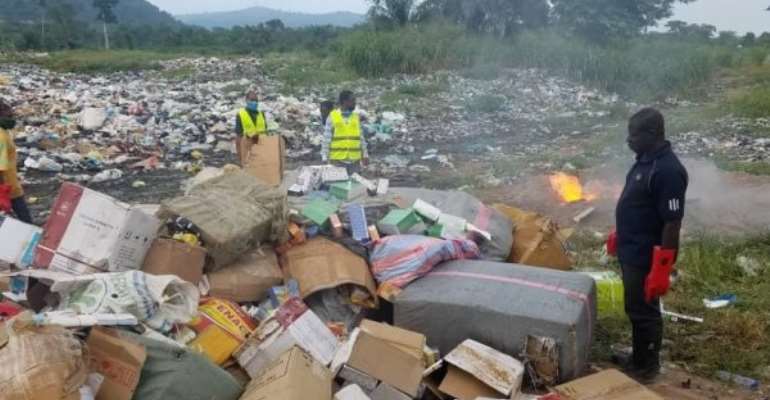 The Ho Sector Command of the Customs Division of the Ghana Revenue Authority (GRA) has destroyed tons of illegally imported goods seized from traders in the Volta Region.

The items, which included; pharmaceutical products, tobacco, Indian hemp, aphrodisiacs, and food products, including; soft drinks, were destroyed by a team from the Ho Municipal Environmental Health Office.

The exercise was carried out under the observation of officers of the GRA, the Police, the Food and Drugs Authority, National Disaster Management Organisation and the Narcotics Control Board, at the Municipal landfill site at Ziavi Adukofe.

Mr Samuel Foli, Ho Sector Commander of the GRA, told the Ghana News Agency (GNA) that the 16 cross-border traders from whom the items were impounded, had no license or proof of import, and that the sector had received the nod from the Commissioner to get them destroyed.

He said tobacco products seized were not meant for the consumption of people in the country, as they did not bear the required labeling, which included health risks in common Ghanaian languages.

Mr Foli also said the law enabling the cultivation of cannabis did not permit its consumption, and cautioned that persons who traded in them would be dealt with.

He said the importation of pharmaceutical products through the nation's landed borders was prohibited, and advised all merchants to do so through the approved channels, where conditions were convenient to maintain their efficacy.

The Commander commended officers for their vigilance, and called for more cooperation from the public and the media saying, “information helps ensure the safety of the country.”

Mr Foli mentioned logistical constraints to the discharge of their duties, and appealed for motorbikes and vehicles to help their surveillance activities.