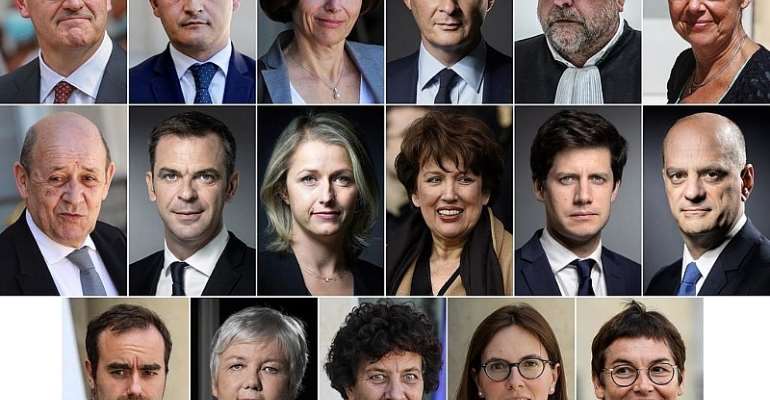 French President Emmanuel Macron has brought on board several right-wing stalwarts to help him steer the country towards "a new path" in what analysts say is a deliberate move to reset the presidency ahead of the 2022 election.

After a long-awaited reshuffle, there were mixed reactions this week to Macron's new line-up, with some critics wondering what all the fuss is about.

"It looks more like a game of musical chairs than anything else," Christian Jacob, head of the right-wing Les Républicains party, told French media.

"He takes the same and starts again."
Despite notable changes at the interior, justice and culture ministries, many posts remain unchanged or have been rejigged. The prestigious jobs, however, have all gone to figures from the right.

"Some of the right-wing ministers who were already appointed in the first government of Edouard Philippe are still there," says Emmanuel Dupuy, national secretary of the UDI, a centrist opposition party.

Gérald Darmanin, a former spokesman to ex-president Nicolas Sarkozy went from the budget to interior ministries, while Bruno Le Maire – also a former Sarkozy minister – was reappointed to finance in a beefed-up role.

"It is the revenge of Nicolas Sarkozy," Dupuy tells RFI amid reports that Sarkozy influenced the choice of Macron's new head of government, Jean Castex – also a former Sarkozy ally. "The former French president is trying to carve and literally shape the policy of political figures."

Castex is reported to have given up his conservative membership days before taking over as prime minister.

Roselyne Bachelot, a veteran of previous right-wing leaders including Jacques Chirac and Sarkozy, made her return to government as Culture Minister, while criminal lawyer Eric Dupond-Moretti took the job of Justice Minister. He is a close associate, too, of the former president.

For Dupuy, it is not so much that Macron is poaching from the right, but rather that he is trying to shore up his legitimacy ahead of his 2022 re-election campaign.

"To win in 2022, he needs a legacy. He wants to tap into Sarkozy's legacy and overtake the traditional right, which may find itself having to compete with its former members," he says.

The drubbing of Macron's ruling La République en Marche (LaREM) party in local elections last month highlighted the difficulty Macron has had in putting down roots across France.

The defeat at the polls came after LaREM lost its absolute majority in May when several MPs defected to create a new political group.

Former prime minister Philippe has been earmarked by Macron to lead a new committee aimed at firming up LaREM at the grassroots level, according to media reports.

Adieu to the political left

Other leading Macron figures, however, have been left out of the new political landscape, including axed interior minister Christophe Castaner and former government spokesperson Sibeth Ndiaye, both from the left.

The president also parted ways with his justice, agriculture and labour ministers, all socialists.

Some critics had hoped the new cabinet would swing left, prioritising social and green issues to meet the country's domestic and global challenges. They were left disappointed.

Despite Macron appointing a former Greens MP to lead the environment ministry, campaign groups voiced doubt over how much influence Barbara Pompili would have.

Castex, who was not previously known for his green credentials, has insisted that "working for the environment is not an option but an obligation," in recognition of the green wave that swept last month's local elections.

"The solidarity of this new government, its ability to speak with one voice, will be one of the major issues going forward," says Dupuy.

"That is what will set it apart from the previous government."