Brazil's president contracts virus as US starts WHO withdrawal

By Louis GENOT with AFP bureaus 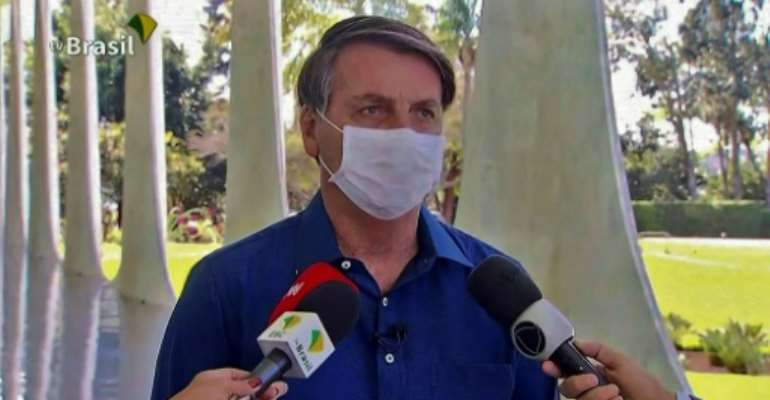 Brazilian President Jair Bolsonaro has tested positive for the coronavirus after months of downplaying the dangers of the disease, as the United States begins its withdrawal from the World Health Organization despite logging a record number of new infections.

The American pull-out from the WHO comes as the UN agency conceded there was "emerging evidence" coronavirus is transmitted through particles in the air, heightening fears over an illness that has already infected nearly 11.8 million people worldwide and caused more than 540,000 deaths.

Countries are struggling to keep a lid on new cases as they attempt to restart economies, with Australia's second-biggest city becoming the latest victim of a second surge after recently lifting virus restrictions.

Millions in Melbourne prepared for a return to lockdown Wednesday that was forecast to run six weeks, as soaring community transmission brings more than 100 new cases daily in the city.

Bolsonaro, who said he had experienced only mild symptoms so far, said he was feeling "perfectly well" as he removed his mask in a TV interview Tuesday to announce his diagnosis.

The far-right leader has consistently ignored virus containment measures such as social distancing despite Brazil being the world's second-worst hit country with more than 66,000 dead.

Brazil accounts for the lion's share of infections in Latin America and the Caribbean, where the caseload has now surpassed three million, according to an AFP tally.

In Washington, a senior US official said the United States had informed UN Secretary-General Antonio Guterres of its intention to leave the WHO, effective July 6, 2021.

The US has submitted its notice of withdrawal to the the World Health Organization. By Fabrice COFFRINI (AFP/File)

President Donald Trump has been critical of the WHO's pandemic response, accusing it of bias toward China and ignoring early signs of human-to-human transmission.

The US is the largest financial contributor to the agency, providing $400 million annually.

Joe Biden, Trump's main challenger in November's presidential election, said he would immediately reverse the decision if he wins.

The pandemic has killed more than 131,000 people in the US, by far the highest death toll of any nation, and on Tuesday the country logged a record number of new daily cases at more than 60,000, according to a tally by Johns Hopkins University.

Officials have said hospitals in some parts of the country are in danger of being overwhelmed.

Top infectious diseases expert Anthony Fauci has warned the US is still "knee-deep" in only its first coronavirus wave.

But Trump pounced on that comment Tuesday, saying America was "in a good place" and adding: "I disagree with him."

Experts are still struggling to understand COVID-19, and the WHO said it was open to new research suggesting the virus can spread through the air farther and for longer than initially believed. Scientists had lobbied for the agency to recognize the possibility.

Panic-buying gripped Melbourne on Wednesday as shoppers snapped up items in preparation for the new lockdown, which also includes sealing the state of Victoria off from the rest of the country.

Australia's largest supermarket chain said it had reimposed buying limits on goods including pasta, vegetables and sugar after shoppers rushed to stores across the region.

"This is not the situation that anybody wanted to be in, but it is the reality that we must confront," said Victoria state Premier Daniel Andrews.

In many nations, adjusting to the new normal of social distancing, masks and fluctuating restrictions is meeting resistance, with health authorities often struggling to win hearts and minds.

The head of the prestigious Royal Society science journal said Tuesday that people who refuse to wear masks should even be stigmatized in the same way as drink-drivers.

"If all of us wear one, we protect each other and thereby ourselves, reducing transmission," wrote president Venki Ramakrishnan.

$200 million Saglemi scandal: Funds were not directly given ...
41 minutes ago