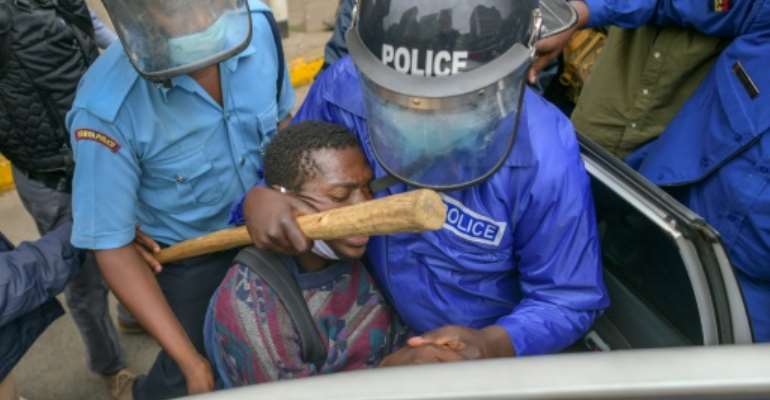 A protestor is pushed into a vehicle after being arrested. By TONY KARUMBA (AFP)

Kenyan police on Tuesday fired tear gas at protesters marching against police brutality in the capital Nairobi, arresting dozens for defying a ban on large gatherings during the coronavirus pandemic.

The march took place to commemorate "Saba Saba" day, which means the seventh day of the seventh month.

It marks the day in 1990 that violent protests broke out in Kenya to demand free elections under the iron-fisted president Daniel arap Moi.

This year the march was aimed at denouncing police brutality, which has seen at least 15 people killed by police enforcing an evening curfew put in place to stop the spread of coronavirus, according to a toll compiled by the police oversight agency IPOA.

Activists had planned demonstrations in downtown Nairobi, as well as several informal settlements, however some were broken up with tear gas, while protest organisers were arrested in several locations.

Contingents of heavily-armed police officers were deployed to protest areas to disperse demonstrators.

"We have 57 in custody and I know the security operation is going on because these people have been retreating and coming back," a police officer involved in the operation told AFP on condition of anonymity.

"It is outlawed, it is not legal, and no permit has been given. As you are aware, no public gatherings are allowed at this time due to COVID-19 and we will not allow anyone to hold any meeting or march of any kind," he said.

"Those arrested will be charged for contravening the ministry of health regulations on COVID-19 by congregating."

People charged with flouting coronavirus restrictions in Kenya have in recent weeks been fined 5,000 shillings ($47, 41 euros) or given community service.

Protesters waved placards reading "Stop the Killings" and "Respect the Constitution" while singing freedom songs and waving the national flag.

"I am yet to know my offence after I was arrested," said Wilfred Olal who was coordinating the protests in the eastern suburb of Dandora.

Human Rights Watch (HRW) has accused police officers of murder and using excess force, whippings and tear gas to violently force Kenyans indoors during the early days of the curfew.

In June, the police oversight agency IPOA said at least 15 deaths had been "directly linked" to curfew enforcement.

In a separate incident, three people were shot dead on June 25 when police fired on a crowd of motorcycle taxi drivers protesting the arrest of a colleague for flouting coronavirus restrictions.

‘Sputnik-V procurement contract must be re-examined’ – Kwaku...
26 minutes ago

Getting Sputnik-V vaccines from black market using middlemen...
26 minutes ago