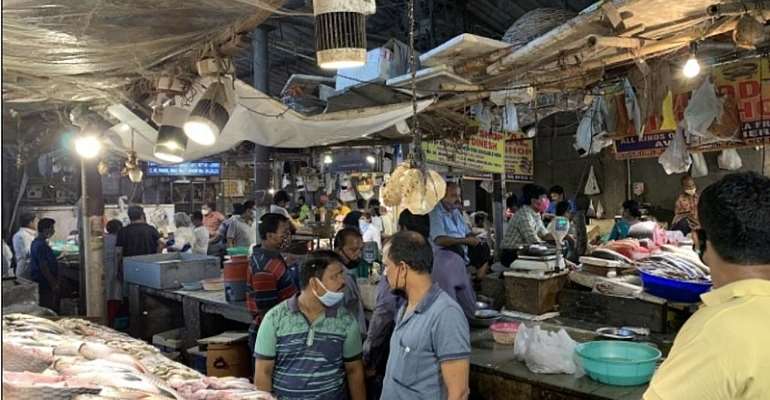 India has now become the world's third worst-affected country accounting for 700,000 coronavirus cases with national capital Delhi described as a hotspot  with hundreds reporting to hospitals daily with the infection.

India overtook Russia and was just behind only Brazil and the United States as the South Asian country reported at least 24,200 new cases during the last 24,  government data showed.

Some 20,000 people have died from the flu since January when the first case was reported.

But the recovery rate has steadily risen to almost 61 percent in the past five months with more than 4,24,000 patients declared fully cured, the health ministry said.

India's testing rate has also shot up, it added.
More than 60 percent of cases in India were in the states of Maharashtra, Tamil Nadu and in the capital territory of New Delhi, where the number of cases touched nearly 100,000 on Monday.

“But there is no need to panic as around 72,000 people have also recovered and the death rate has also come down,” Delhi state Chief Minister Arvind Kejriwal said in a digital press briefing on Monday.

Health survey
“The number of patients in hospitals has also gone down,” Kejriwal added as his administration ordered a door-to-door survey of residents with all flu-like symptoms outside 421 so-called containment zones.

“Delhi government has expanded the scope and scale of the Covid survey,” The Times of India newspaper said.

In June, city authorities warned the number of cases in Delhi could reach half a million by this month end and said they would convert hotels and stadiums into field hospitals.

Army medics are already caring for patients in specially customised railway carriages at nine locations in the national capital.

City malls too have reopened but visitors were required to have their temperature taken, pass through security and walk through a tunnel that sprayed them with mild disinfectant.

But in contrast, social distancing norms were disregarded at several shopping zones such as Delhi's popular fish market in the Chittaranjan Park residential district.

“It is just not possible to maintain any kind of a discipline here,” added a store-keeper.

Announcements over the PA system requesting customers to follow health protocols were a common sight in other shopping districts.

The reopening of public spots in Delhi and elsewhere in India is a part of a phased end to the world's largest coronavirus lockdown.

However, the western Indian state of Goa, a popular seaside tourism destination, reopened 250 hotels after three months but said visitors will have to get tested on arrival or carry COVID-19 negative certificates.

India had planned to reopen Taj Mahal to 5,000 tourists a day beginning Monday but on the last minute decided to keep the mogul-built monument to love off limits to visitors for an indefinite period.