Australia locks down millions as US struggles to contain virus 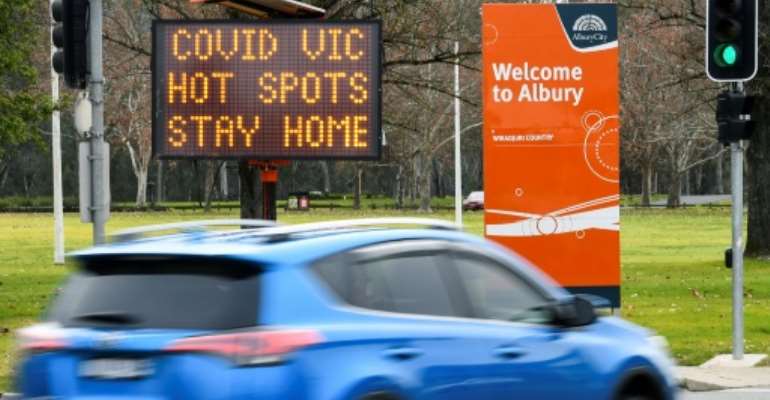 Australia has ordered millions locked down in its second-biggest city, and effectively sealed off Victoria state to combat a new coronavirus surge. By William WEST (AFP)

Australia on Tuesday ordered millions of people locked down in its second-biggest city to combat a surge in coronavirus cases, as nations across the planet scrambled to stop the rampaging pandemic.

While some countries are worried about second waves of infections, the worst-hit -- the United States -- was still "knee-deep" in its first, its top expert warned, with cases also surging in India and Brazil.

Global COVID-19 cases have surged past 11.5 million with more than 536,000 dead, and the lingering threat was illustrated by Australia -- which had largely suppressed its outbreak -- locking down five million people in Melbourne to fight a recent spike.

Chart highlighting six countries with most new cases in the past week.. By John SAEKI (AFP)

"We can't pretend" the coronavirus crisis is over, said Daniel Andrews, premier of Victoria state, after its capital Melbourne reported 191 new cases in 24 hours.

"These are unsustainably high numbers... There is simply no alternative (to the lockdown) other than thousands and thousands of cases and potentially more."

The lockdown of the Melbourne metropolitan area would begin at midnight Wednesday and last at least six weeks, while Victoria state will effectively be sealed off from the rest of the country a day earlier.

Anthony Fauci, the top US infectious disease expert, has warned that the country is still 'knee-deep' in its first coronavirus wave. By POOL (GETTY IMAGES NORTH AMERICA/AFP)

Officials have warned that hospitals in some parts of the country are in danger of being overwhelmed, with many states hit particularly hard after they eased virus restrictions.

"We are still knee-deep in the first wave of this," warned Fauci on Monday, saying the US never managed to suppress infections to a manageable level before reopening like some European nations.

"We went up, never came down to baseline, and now we're surging back up. So it's a serious situation that we have to address immediately."

Experts say better ventilation and air filters in buildings may be needed to ward off coronavirus infection via airborne droplets. By STR (AFP/File)

Some mayors have said their cities exited lockdown too early, as President Donald Trump tried to downplay the severity of the crisis, instead prioritising economic reopening.

But in the latest example of the human toll, the US government on Monday said it would not allow foreign students to remain in the country if all their classes are moved online because of the virus.

"The worst thing is the uncertainty," said Gonzalo Fernandez, a 32-year-old student from Spain.

"We don't know if we will have classes next semester, if we should go home, if they are going to throw us out."

Around the world, governments are struggling to balance the need to reopen economies wrecked by weeks of lockdown measures against the risk of new infections.

Brazilian President Jair Bolsonaro has been slammed for his response to the coronavirus crisis. By Sergio LIMA (AFP/File)

Adding to the complexity of the challenge, a group of experts warned the virus can spread through the air far beyond the two metres (six feet) currently urged in many social distancing guidelines.

There have been explosions of infections across the world, from Iran and South Africa to India and Brazil -- whose virus-sceptic president Jair Bolsonaro was tested for the virus after showing symptoms including fever.

The far-right leader has lashed out at social distancing measures, frequently flouting them, and on Saturday published photos in which he was not wearing a mask at a July 4 event with the US ambassador.

He has been sharply criticised for his response to the crisis, with Brazil becoming the second worst-hit country in the world with more than 65,000 deaths and 1.6 million infections.