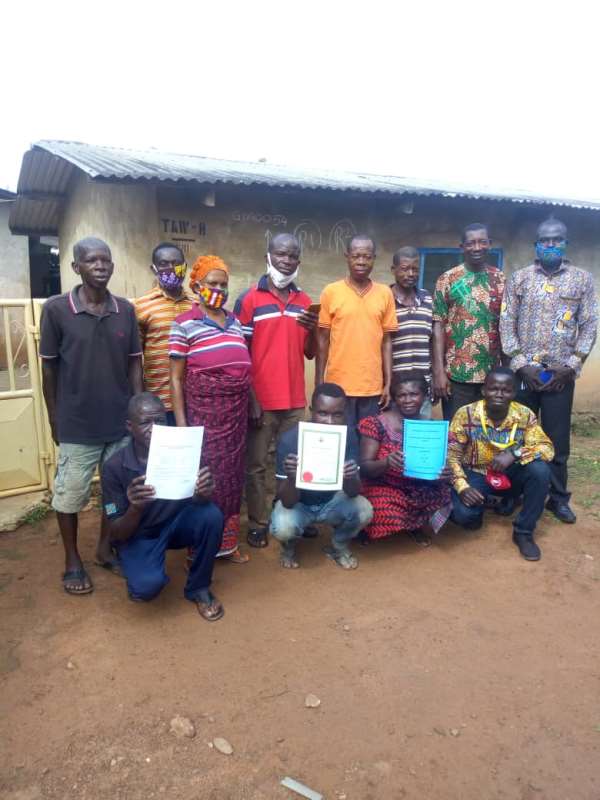 Cocoa farmer groups in Nkonya Tayi in the Hohoe-Kpeve Cocoa District of the Volta Region today, 6/07/2020 have received certificates from the Department of Co-operative in conjunction with Ghana Cocoa Board to operate as a legally registered cooperative.

This comes as the fourth community in the Nkonya Operational Area to receive such legal certificates after Nkonya Wurupong, Nkonya Ahenkro, and Nkonya Asakyiri Cocoa Farmer Cooperatives early this year. Receiving the certificate, the Chairman of the Nkonya Tayi Cooperative Cocoa Farmer and Marketing Society Ltd, Mr. William Ohene expressed his happiness to the Department of Cooperatives as well as COCOBOD for the honour and the role that the COCOBOD has reposed in the cooperatives across the Cocoa Industry.

Mr. Ohene added that Nkonya Tayi had produced 80 tonnes of Cocoa per season before, and has hopes that, “this cooperative will help us reclaim our past glories”. He thanked COCOBOD for the provision of the Cocoa–Buying Scale and appealed for “permanent buyer stationed at Nkonya Tayi to reduce their stress”.

The Technical Officer of Extension in the area, Francis M. Eshun, thanked the leadership of the cooperative for their continual support to COCOBOD in carrying out Productivity Enhancements Programmes (PEPs), viz Pruning, Fertilization, Hand Pollination, Irrigation, Rehabilitation, Seedling Distribution aimed at ensuring COCOBOD target of restoring its lead as the world’s largest producer of Cocoa be realized.

The District Extension Officer for Hohoe-Kpeve Cocoa District, Mr. Derick Alabi-Donkoh entreated the farmers to use the cooperative as a base to raise the standards of not only cocoa production but also standard of living among cocoa farmers.

He added with the cooperative in place, the farmers must follow it up by opening the account and ensure it becomes beneficial to them.

He assured the farmers that, the office is still working to ensure the fertilizer they requested is delivered to them.

The Municipal Cooperative Officer in the area, Mr. John Vorvor said, “your certificate cannot work on its own, but you the farmers”. He delivered five points of advice to the new Cocoa Farmer Cooperative: tolerance; trust; patronage; meeting and establishment of group farm.

He said the farmers should be tolerant of each other, accountable to each other, which will intend lead trust, and they should regularly meet to address issues as well as coming together to establish a group farm, to generate income for the cooperative.

‘Sputnik-V procurement contract must be re-examined’ – Kwaku...
49 minutes ago

Getting Sputnik-V vaccines from black market using middlemen...
49 minutes ago