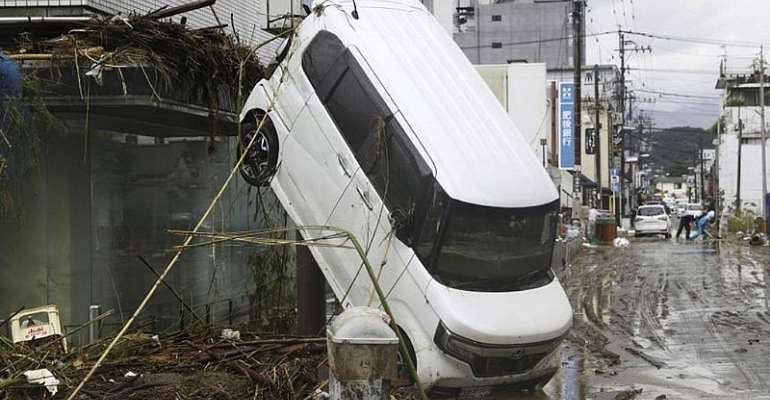 Torrential rain hampered the efforts of tens of thousands of rescue workers in southwestern Japan on Monday as they hunted for survivors from deadly floods and landslides, with more downpours forecast.

Prime Minister Shinzo Abe warned the weather front was heading across the country, predicting "heavy rain over a wide area" and urging people to "take action to protect their lives."

In the worst-affected region of Kumamoto, bad weather was preventing some rescue efforts, local officials said, with at least 13 people still unaccounted for.

The floods washed away roads and bridges, leaving many isolated communities cut off.

A local firefighter in the western region of Kagoshima told the French news agency AFP they used boats to rescue 11 people, but conditions were making it hard to reach others.

"Calls came from people telling us that they wanted to flee their home but they could not do it on their own," he said.

"Some roads are submerged and you cannot drive through them."

Urgent call for food and water

In one of the hardest-hit areas, residents wrote out the words "rice, water, SOS" on the ground, while others waved towels and called for rescue and relief goods.

At a nursing home for the elderly, 14 people were feared dead when water from a nearby river inundated the ground floor, leaving those in wheelchairs unable to reach higher ground.

Emergency services, aided by locals in rafts, managed to rescue around 50 residents and staff from the facility, bringing them to safety by boat.

Heavy rain is expected to continue through Tuesday afternoon and the Japan Meteorological Agency issued a non-compulsory evacuation order for around half a million people in southwestern Japan.

Don’t give literal meaning to Akufo-Addo’s response to Torbg...
54 minutes ago