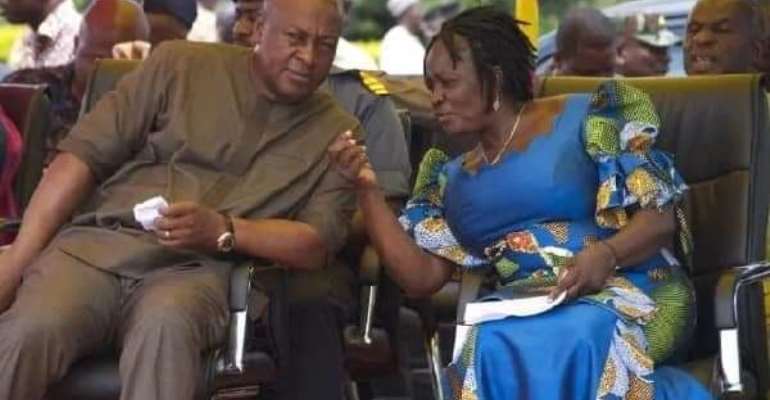 Prof Opoku- Agyemang beat former Finance Minister Dr Kwabena Duffuor who was assured of the slot after Dr Kwesi Botchwey turned down the offer on personal reasons mostly on trust.

Mahama succeeded in convincing the regional chairmen of the party who had earlier described the former Education Minister as a ‘non starter’.

Report reaching DGN Online indicates that the NDC leadership had turned down the choice of running mate selected by the flagbearer, John Mahama.

At a hurriedly arranged meeting of regional chairpersons of the party at the NDC regional office in Accra on Sunday evening, ahead of NEC meeting on Monday, the chairmen flatly turned down the former Education Minister as the running mate to Mr Mahama.

The former president was said to have personally called some of the chairmen to sell his choice to them ahead of their meeting but they were swayed by superior arguments against the former Minister who is likely to be the first woman vice presidential candidate.

Sources close to the meeting indicate that some of the chairmen rooted for former Finance Minister, Dr Kwabena Duffuor while Ade Coker was championing for Kingsley Kwame Awuah-Darko, beleaguered chief executive of BOST.

Report says Awuah-Darko's name was not among the shortlist because of pending corruption cases.

Dr Duffuor was the front runner until he was slapped with charges of fraud and money laundering over the collapsed of Unibank which he owned.

He is not a known platform speaker but an astute technocrat.

Mr Mahama had earlier offered the slot to former Finance Minister under Jerry John Rawlings, Dr Kwesi Botchwey who rejected the offer on grounds of trust and principle telling the NDC flagbearer his fear of retiring from politics with a defeat in apparent reference to Mahama's inability to win the 2020 polls.

Mahama had betrayed Botchwey when President Atta Mills died, having promised to make him his vice president only to settle on Kwesi Bekoe Amissah-Arthur of blessed memory.

NDC National Chairman, Samuel Ofosu Ampofo and General Secretary, Johnson Asiedu Nketiah had also protested the choice of Naana Opoku Agyemang who appears to enjoy the support of the moribund Fanti Confederacy headed by the Patriarch of the Ahwoi family, Ato.

The regional chairman after the meeting quickly drove straight to Chain Homes residence of Mahama to tell him that his choice will not resonate with Ghanaians.

Prof Opoku Agyemang was not known to be a card bearing member of the party having said it openly that she was not a registered member of the NDC.

She was the architect of the scrapping of the Trainee Teachers allowance when she was Education Minister.

There are strong indications the scheduled NEC meeting for Monday was heading for cancellation until Mr Mahama ‘sweet talked’ the chairmen that his choice of Naana was to leave the scene on a clean slate after the 2020 elections for the agenda 2024 advocates to take over.

incorruptible among the lot, pleading for support from them to push her candidature.

With the acceptance, he is set to present her to NEC this morning.