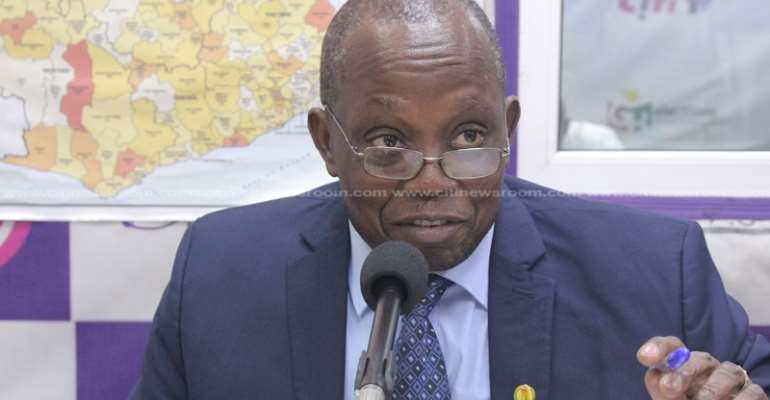 Opposition Member of Parliament (MP) for Ningo Prampram, Samuel Nartey George, has advised the Auditor-General, Daniel Yao Domelevo, to abort any plans of going to court over a directive he received from President Akufo-Addo to proceed an on accumulated leave.

“Mr. Domelevo, don’t go to court. The court of the public opinion, the people of this country can read between the lines,” Sam George said on The Big Issue.

Mr. Domelevo is said to have made use of nine out of his 132 annual leave days since assuming office in December 2016.

But the Office of the President later added 44 more working days to the 132 annual leave days after Mr. Domelevo, in a letter to the Presidency, urged Akufo-Addo to reconsider the directive, claiming that it breaches the labour law and is unconstitutional.

In the letter , Domelevo argued that based on the labour law and recent practice, “no worker is deemed to have accumulated any leave on account of having failed, omitted, neglected or even refused to enjoy their right to annual leave, which the law guarantees for their benefit, not the employer.”

But a letter signed by the Secretary to the President, Nana Bediatuo Asante, in response to the Auditor-General’s assertions maintained that Mr. Domelevo has no knowledge in law and thus his perception of the directive being an affront to labour laws is “extremely misleading“.

It said the government's decision is well-grounded in law and that Mr. Domelevo lacks a proper and legal understanding of his legal entitlements.

In reference to the response by the President’s Secretary, Sam George, who doubles as a member of the Public Accounts Committee in Parliament stated that the explanation given by the Presidency goes contrary to the labour laws.

“Nana Asante Bediatuo in this latest response has shown that he lacks political and emotional intelligence. If you read the tone of this letter, it is as though he has a beef with Domelevo. The language is unbecoming of the Office. And one thing he fails to do in his letter, one fundamental issue of law that Domelevo raises was not answered in there. The question that can leave be accumulated? Asante Bediatuo says Domelevo cannot understand the principles because he is not a lawyer. The fact that somebody is not a lawyer does not mean he cannot read an Act and understand and does not mean the person cannot engage the services of a lawyer to interpret for him.”

“Austin Gamey who has done quite well with our labour laws in Ghana has come out and said you cannot accumulate leave. Your leave expires at the end of the expiration of that year. He should have taken the annual leave for this year. Meanwhile, the Executive Secretary of the President who is a lawyer and knows all says that he is accumulating for all those years so he should go for 167 days,” he added.

Already, some individuals are of the view that the President’s directive raises further questions.

The development has since generated heated conversations on social media with many accusing the government of bad faith and employing a tactic to remove the Auditor-General from office for being critical of state spending.

Our members are dying, pay us – Contractors lament
34 minutes ago