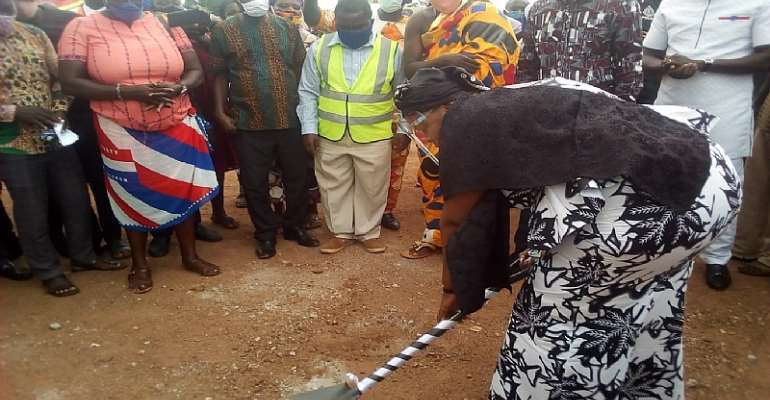 Mad. Amma Kumi Richardson, Bono Regional Minister as she cuts the sod for the commencement of the project.

The Bono regional Minister on Friday, 3rd July 2020 broke the ground for the construction of a multi-million Ghana Cedis market project and other ancillary facilities at the Berekum Thursday market in the Bono region. The over seven million Ghana Cedis project which is under the Secondary Cities Project is expected to start immediately. The Secondary Cities programme is a multi-million-dollar project funded by the World Bank to accelerate development in the various municipalities in the country based on the performance of beneficiary municipalities.

Addressing a gathering before the official sod-cutting of the project at the Berekum Thursday market, the Bono regional Minister, Mad. Evelyn Amma Kumi Richardson said the project was in fulfilment of the President’s promise in the 2016 general elections to bring development to the people and enhance their livelihoods. The minister minster said the project was an initiative if the Ministry of Local Government and Rural Development with the objective of improving urban management and provision of basic services in urban Assemblies.

Mad. Kumi Richardson disclosed that out of the twenty-five municipalities benefiting from the project nationwide, the Bono region alone has three namely Berekum, Dormaa and Sunyani. She said the selection of the three municipalities is a demonstration of their hard work. She appealed to the citizens of the Municipality to lend the necessary support to the Assembly and the contractors to ensure that the project is completed within the nine months’ duration.

The Municipal Chief Executive was full of praise for the cooperation if stakeholders in the market including the market women and men, the Ghana Private Road Transport Union and further entreat them to continue their support towards the timely completion of the project. He also thanked staff of the Assembly for their hard work that culminated into the Assembly meeting the criteria for qualifying for the fund.

‘Sputnik-V procurement contract must be re-examined’ – Kwaku...
23 minutes ago

Getting Sputnik-V vaccines from black market using middlemen...
23 minutes ago