Identifying migrants who died at sea meticulous work for Tunisia 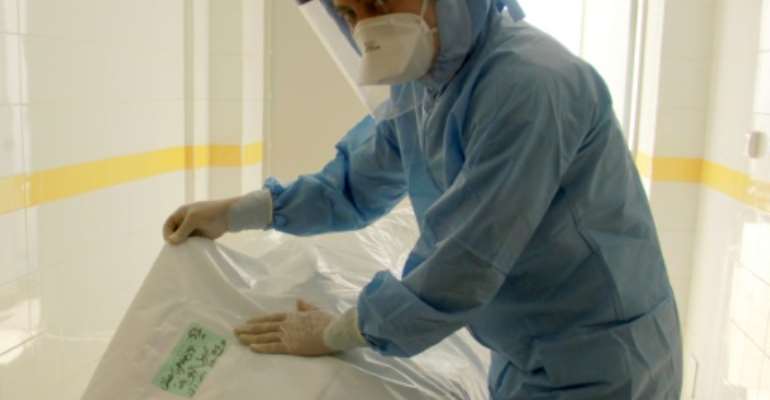 Forensic scientists in the coastal Tunisian city of Sfax have gathered photos, medical data and other information on those aboard a migrant boat that capsized off the Tunisian coast in early June, leaving no survivors. By Hamdi ZAGHDANE (AFP)

The identity of dozens of migrants who drowned off Tunisia last month might have been lost without a trace, like thousands of others who have disappeared on the treacherous sea route to Europe.

But when authorities recovered 61 bodies near the eastern port city of Sfax, they carefully took note of any details that could one day help lead to their identification.

He and his team have gathered photos, medical data and other information on the 30 men, 29 women and two children aboard the migrant boat that capsized off the Tunisian coast in early June, leaving no survivors.

The boat's local captain was quickly identified, but for the passengers -- all from sub-Saharan Africa -- the task was much more difficult.

The migrants were buried in a Muslim cemetery near Sfax, in numbered and indexed graves, in case one day someone should come to claim them or discover their fate.

Dozens of bodies of foreign migrants are recovered from the sea off Tunisia every year, casualties of journeys toward Europe across the Mediterranean that ended in tragedy.

But in recent years, the identification process has improved, in Tunisia as well as some other Mediterranean countries.

Italy has been regularly taking DNA samples since 2014, according to forensic pathologist Cristina Cattaneo, who heads an unprecedented operation that seeks to identify migrants who died at sea.

Data is centralised through a broader government entity for missing persons that also handles shipwreck victims, but procedures are not yet harmonised, she said, calling on European institutions to take over the responsibility.

More than 20,000 migrants have died in the Mediterranean since 2014, according to the United Nations -- more than 80 percent of them in the deadliest zone, traced out between Italy, Malta, Libya and Tunisia. 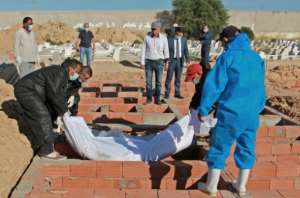 Migrants who perished en route to Europe were buried in a Muslim cemetery near Sfax, in numbered and indexed graves, in case one day someone should come to claim them or discover their fate. By Hamdi ZAGHDANE (AFP)

Only a third of the bodies have been recovered.

War-torn Libya, a departure point for migrants of all backgrounds, buries bodies without keeping records, and gathering information there is difficult.

But Tunisia, despite its limited means, has harmonised its testing procedures, after a series of consultations with the International Committee of the Red Cross (ICRC) that began in 2017.

"The bodies of migrants who drown must be systematically analysed by forensics" for fingerprints and DNA samples, said Maatoug, who is the head of forensic medicine at the Habib Bourguiba University Hospital in Sfax.

When they arrive at the hospital, the corpses are assigned a number that is written on their file and finally, on their grave.

In the Sfax morgue, the team busily notes the clothes and the physical characteristics of the bodies, bloated and wrapped in seaweed, their faces disfigured.

"These clues can help the victims' families recognise them and finally mourn them," Maatoug told AFP.

But "DNA analysis remains the most reliable way of identifying a person, even decades later", he added.

His team alone has carried out 412 DNA tests since Tunisia's 2011 revolution, which marked a sharp increase in departures from the country's coasts. 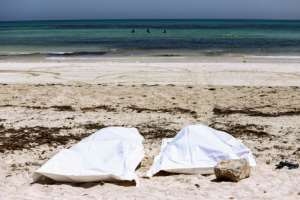 Dozens of bodies of migrants -- like those retrieved on the island of Djerba last year -- are recovered from the sea off Tunisia every year, casualties of journeys toward Europe across the Mediterranean that ended in tragedy. By ANIS MILI (AFP/File)

A growing number of bodies recovered belong to foreigners, whether they took boats from neighbouring Libya or were among a rising number of West Africans trying to depart from Tunisia.

Identifying them requires a large amount of coordination.

But "the centralisation of data and the procedures for sharing it" are yet to be worked out, said Bilal Sablouh, the ICRC's regional coordinator for forensic medicine.

Families looking for loved ones can request information from the Red Crescent or the Red Cross in their own country.

The ICRC then contacts the relevant authorities -- the justice ministry or forensic services in the area where the person might have embarked on their sea crossing.

"We also carry out our own research," said Anne Montavon, deputy head of the ICRC's regional delegation in Tunis.

"The requests are low in Tunisia, there are many more for Libya," she said.

The ICRC said a small number of families had been able to receive confirmation of the death of a missing loved one, and sometimes even locate their body -- key steps in the mourning process.

Maatoug said he had not yet had a request for the repatriation of a body, but nonetheless he and his team "continue to carry out the identification protocols".

"Maybe one day, a son or grandson will come to claim his father or grandfather," he said.

"We must keep reliable records."