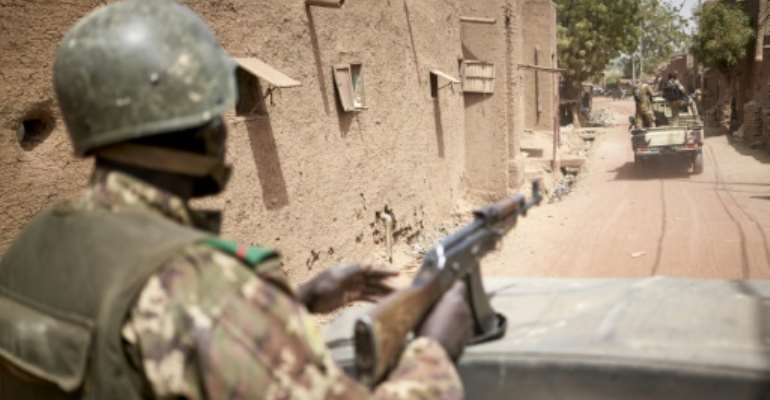 The Malian army has struggled to contain the violence involving jihadists and also inter-communal clashes. By MICHELE CATTANI (AFP)

Unidentified armed men massacred 31 civilians in simultaneous attacks on several Mali villages this week, then killed nine soldiers responding to the assault as violence surges in the country's conflict-wracked centre.

An Islamist insurgency that erupted in the north of the vast West African country in 2012 has swept to its centre, inflaming ethnic tensions along the way.

The attack left at least 30 dead, including women, children, and the elderly, while others were missing, the official added.

"From 3 to 9 pm, nobody came to our rescue," said Youssouf Tiessogue, an elder from Gouari, one of the villages attacked.

Deploring the army's "inaction," he said: "It is always late and never confronts the bandits even if we tell them where they are."

Officials did not immediately blame any group.

On Thursday, the army received information about a new attack and sent the unit to Gouari, he said.

"When it arrived at around 8 pm, the village seemed deserted, there were practically no signs of life," he said.

"Just at the entrance, the FAMa (Malian Armed Forces) walked into an ambush," he said, adding that nine soldiers were killed and two wounded.

The attacks were not far from the village of Ogossagou, where 31 civilians were killed in February and 160 were butchered last year -- all Fulani.

The rebels were then outmanoeuvred by their Islamist allies and the French military intervened to force them back.

The conflict has since travelled south, as well as spilling into neighbouring Burkina Faso and Niger, igniting a tinderbox of ethnic resentment and stoking fears for the future of the fragile nation.

Armed groups coming from the north found fertile soil in an area riven by long-running land disputes, often between herders and farmers.

Central Mali is now prey to tit-for-tat killings and routine jihadist attacks. Hundreds of thousands of people have been displaced.

A jihadist group active in the region led by radical Fulani preacher Amadou Koufa has also increased suspicion of his ethnic group.

In response to jihadists, traditional Dogon hunters have formed so-called self-defence groups, adding to the tension.

More than 5,000 French troops, a regional G5 Sahel military cooperation deal and a UN peacekeeper mission in Mali have not been enough to contain the violence.