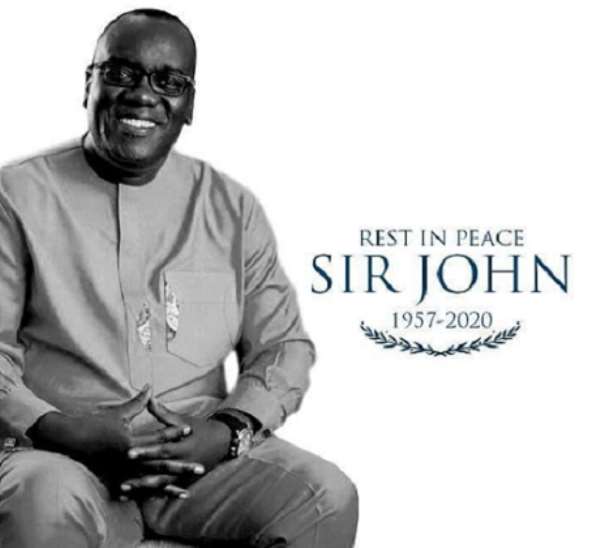 President Akufo-Addo has expressed shock over the death of the former General Secretary of the NPP, Kwadwo Owusu Afriyie aka Sir John.

Reports say he was taking treatment in the Intensive Care Unit of the Hospital.

Reacting to his death, President Akufo-Addo says “I received the news of the death of Kwadwo Owusu Afriyie, aka Sir John, with great shock and deep sadness. Indeed, the disbelief and grief expressed by many at the news of his death are testimony to how people, in and out of the New Patriotic Party (NPP), felt about him.”

The President wrote on Facebook, “Passionate devotee of the Danquah-Dombo-Busia political tradition, outstanding stalwart of the NPP, strong defender of human rights as a lawyer, proud, faithful adherent of the Christian Adventist faith – these were the multi-facetted aspects of the career and character of 'Sir John', which earned him considerable renown both as erstwhile General Secretary of the NPP and CEO of the Forestry Commission. Energetic, ebullient, jovial, with an exceptional sense of humour, and possessing a limitless store of folktales and proverbs, he affected positively every person with whom he came into contact. He was truly unforgettable, and our party and government owe him an immense debt for his work and commitment.”

“My wife Rebecca and I extend our deepest condolences to his entire family. Sakora Wonoo has lost a valiant son. He will be widely missed.”

“May the Good Lord bless him, and give him a peaceful place of abode in His Bosom until the Last Day of the Resurrection when we shall all meet again. Sir John, we will never forget you!!”

Your hypocrisy is telling — Murtala Mohammed blasts CJ over ...
17 minutes ago

Greening Ghana Project fits into our 30% greening project — ...
24 minutes ago