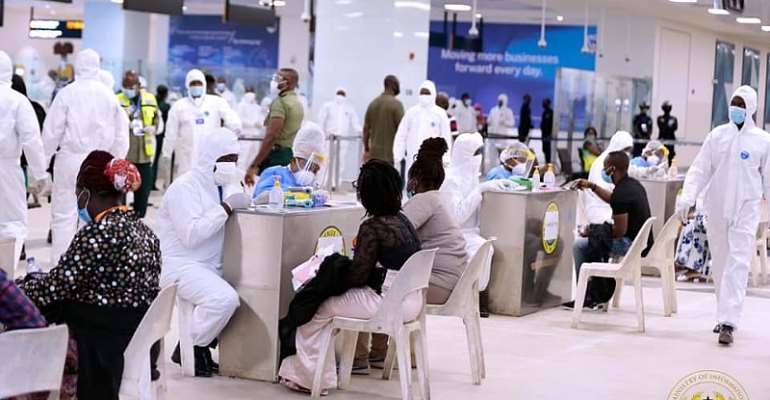 Some 50 Ghanaians who were evacuated from the United Kingdom (UK) and placed in quarantine have checked out of their hotel rooms without knowing their COVID-19 status.

This was done following what they describe as abandonment by the state.

After arriving at the airport, their samples were taken and were told to expect the results after three days.

But after two weeks after, they are yet to receive the results of their COVID-19 test.

A gentleman who spoke to Umaru Sanda Amadu on Eyewitness News slammed Ghana Health Service for having to keep them at the various hotels for two weeks without any communication on their results.

Although he acknowledged that the bills for the hotel services were agreed to be covered by them even before coming down, he lamented that not getting access to their test results mean they have wasted money and time.

“The challenge is who is going to pay for the bills because we were not ready to pay for extra money. Why would you be kept at a place to be paying so much and still not know your results? To me, it doesn’t make sense,” he stressed.

After agitations from them, the officials from the health service gave them clearance to go to their homes on Wednesday to continue the quarantine from there.

He said the health officials explained that they had not received their results because the COVID-19 testing centres were overwhelmed.

The returnee further advised that if this is how the situation is going to be for the next batches of evacuees from other countries, then it was better off they went straight home to self-quarantine once they touched down to save their money.

“My point is why do you keep someone for this number of weeks without any results? We agreed to the whole process before coming down. We knew we’re going to go through quarantine. But if we have done our part and the government is not doing its part, then it doesn’t make sense keeping the people. But if you’re going to keep them there and you can be sure that the results will be out and you let them know their status before you release them, that makes sense. Because someone may be infected and they might not know. It’s a good exercise, but it doesn’t make sense to keep them, while they are not getting results,” he remarked.