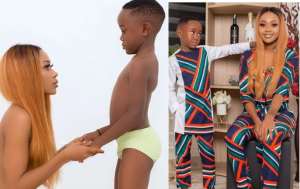 The Ministry of Gender, Children and Social Protection has said it is liaising with the appropriate agencies to take action on a post by actress Rosemond Brown popularly known as Akuapem Poloo, in which she posed nude in front of her seven-year-old son on Instagram.

Rosemond Brown, known in showbiz circles as Akuapem Poloo, on Tuesday, 30 June 2020, posted a nude photograph of herself kneeling before her son, who was also wearing an underwear, to mark his 7th birthday celebration.

Akuapem Poloo wrote the following unedited comment along with the picture: “Son today reminds me of the very day I gave birth to you with no stress and with no regret...30th June 2013 exactly 4:46 am Sunday Haha I still remember this date paa because it's really meant a lot to me, I only felt the 30 minutes pain when you were turning to come out you were soo good to me. I gave birth with no complication, no cut no disability Haha I love you son. You see how you looking at me always remember that I love you. I'm naked in front of you because this is how naked I was giving birth to you, so in case you find me naked lying somewhere don't pass by me but rather see me as your mom who brought you to life.”

The photograph has since gone viral on social media.

A statement signed by the Gender Minister, Cynthia Morrison, on Wednesday, 1 July 2020 noted that the Ministry’s attention had been drawn to the nude photograph and “the ministry highly condemns this act which is classified as indecent exposure of the child, an act of pornography, degrading, and also against the Children’s Act 1998 (Act 560) and the Criminal and Other Offences Act, (Act 30)”.

The ministry reiterated “that the posting of nude pictures on social media at all times is a serious offence” and urged the general public to “desist from the act.”

Akufo-Addo Commends Otumfuo For Releasing 150-acre Land For ...
52 minutes ago