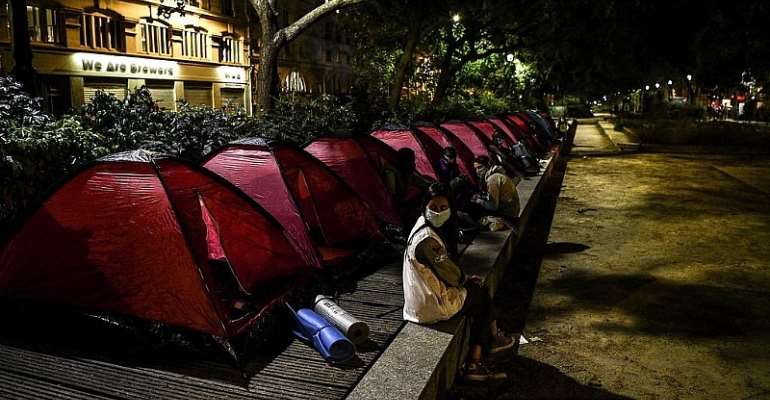 Five French NGOs offering support to undocumented migrant minors have set up a camp in the centre of Paris. They are demanding that the authorities provide migrant minors with administrative support, protection and housing.

Volunteers from the NGOs have set up individual tents for 75 migrants at the Jules Ferry square near Place de la République in the 11th district of Paris.

The NGOs are also fighting for the unaccompanied youth to be recognised as minors by the authorities as it will enable them to obtain greater protection under France's child welfare system.

The unaccompanied migrant minors live rough and face risk of abuse and exploitation. They say their efforts to obtain documents as minors failed as officials considered them to be adults.

Meanwhile, they have no proper housing facilities while their asylum requests are being processed.

“The administrative process takes between six months to a year and a half. So, during that time the youth have to fend for themselves,” said Florent Boyer, coordinator for Utopia56.

Doctors Without Borders (MSF), TIMMY – support to exiled minors, the Committee for the Health of Exiled (Comede), Midis du MIE and Utopia56 are the five aid groups which mobilised efforts to set up the red tent camp near République in the centre of Paris.

They say that along with other aid groups, they are the ones which provide support and housing to the youth in the absence, they claim, of “adequate action from local authorities”.

"They have to rely on help from associations for lodging, food and medical care," MSF's Caroline Douay told AFP. “This not the job of NGOs to fund such services.”

She added that roughly 300 foreign minors live in or near Paris, in hotels or on the street.

According to the aid groups, the local authorities did not provide any support at all for the youth during winter and the Covid-19 lockdown.

"I arrived in Paris seven months ago after going through Libya and spending three days on an inflatable boat in the Mediterranean before reaching Lampedusa,” Andre, a 17-year-old Ivorian, told AFP.

But French officials ruled he was not a minor, a decision he has appealed against.

According to MSF, local authorities often make “mistakes” in refusing to acknowledge the migrant youth as minors as proved by the 2019 ruling of a judge who recognised 56 percent of them as such.

Dozens of camps have sprung up in Paris in recent years, set up by migrants from Africa, the Middle East and South Asia, some hoping for asylum but many others hoping they will reach the northern coast near Calais and eventually Britain.

Most camps are cleared out by police, and the government has vowed to prevent them by opening more shelters for asylum seekers, though it has also stepped up deportations of those whose requests are rejected.