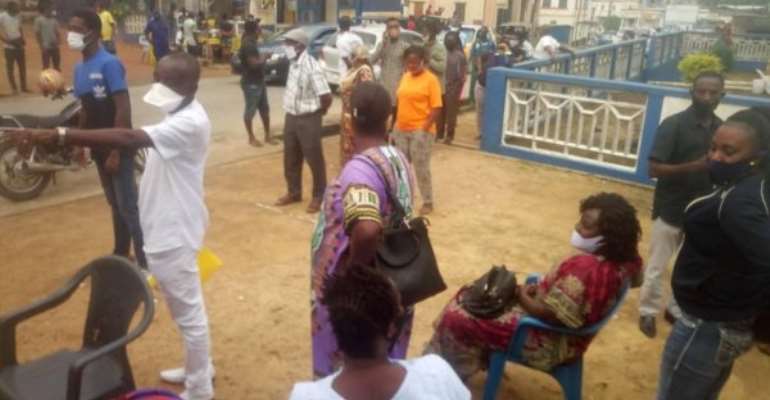 The Electoral Commission's (EC) voters' registration exercise is smoothly underway in the Cape Coast Metropolis but on a low start.

A total of 278 registration centers in the Region have been earmarked for the phase-one of the exercise which will end on Sunday, July 5.

The Commission had projected to register about 16 million eligible voters nationwide in the exercise which began on Tuesday, June 30 and expected to end on Thursday, August 6.

There were agents of the New Patriotic Party (NPP) and National Democratic Congress (NDC) at all centres visited amidst maximum security by personnel of the Ghana Police Service to maintain law and order.

Most centres had not recorded more than 20 people as at 1050 hours.

Some of the officials said it had been so in previous exercises, but the situation changed as the days progressed.

They appealed to the EC to intensify public education on the registration exercise, to encourage more people to show interest in the exercise.

On the safety protocol measures, all registrants were obliged to go through a mandatory process of washing of hands, checking of temperature and joining the two-metre distance marked queues.

On the registration process, all registrants were asked to give ready information including; the right spelling of names, date of birth, current residential address, parents' names, hometown, residential address of hometown, and the district of the hometown to facilitate the process.

Thereafter, a registrant would show officials either a passport or the Ghana Card as proof of identity and proceed to the next table, where the person's biometrics, including; fingerprints, picture and facial details, would be taken before proceeding to the data entry table to complete the process.

The officials also took the prospective voters through the process of guaranteeing for others who would not have any of the two identification cards.

Pregnant women, Persons with disabilities and people above 60 years, were in a different queue for preferential services.

Mrs Cynthia Ato Davis, the EC official in charge of Ayikooayikoo registration centre described the process as smooth with full cooperation from all.

At Ayikooayiko registration center, five people had registered using the Ghana Card as at 0844 hours when the GNA visited.

Some registration officials had crowded under one canopy in addition to the prospective registrants as scores waited anxiously for their turn.

At St. Joseph's Catholic Church centre, Mr Dickson Zola, an official, told the GNA that 15 people had registered using the Ghana card as at 0905 hours without any hitches.

Mr Morrison Miracle, the officer in charge, praised the agents of the NPP and NDC for the cooperation and urged them on.

He described the registration process as great unlike previous ones where the biodata of eligible voters were taken before capturing the biometrics, the new BVR kits required a reverse of it.

He added that the new equipment were modern and fast and one could complete the registration process in about seven minutes.

Anti-gay bill : Tell foreign missions if they provoke us we'...
44 minutes ago