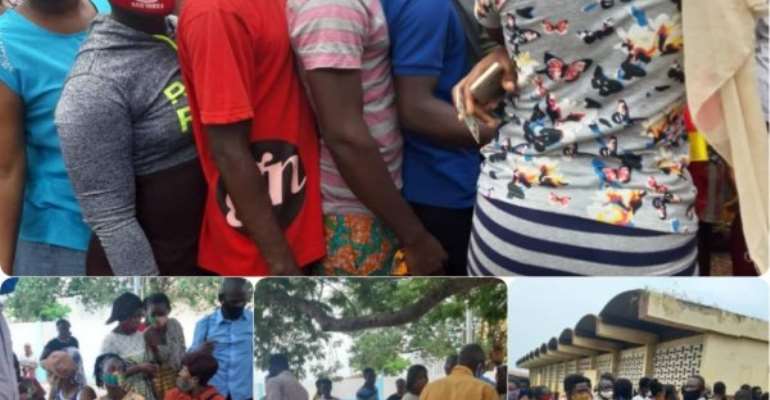 Some residents of Tema who thronged various voter registration centres in the Metropolis had difficulty obeying the social distancing protocol against the spread of COVID-19.

Some centres visited by the Ghana News Agency, revealed that even though some chairs and benches, had been provided, it was impossible to observe the one to two metre recommended social distancing.

At the Padmore School in the Tema East Constituency, hundreds of people were seen jostling as they have formed a tight-knit queue at the entrance of the school gate.

A few of them were seen seated while the others kept shouting and expressing their disappointment at the provision of only one set of registration equipment for the densely populated area.

They agreed that the protocols especially social distancing were not working at the centre but explained that it was the only way to ensure that they all got the opportunity to register as they suspected some foul play by the registration officers.

The registration officers who were spotted threatening to shut the centre down, told the Ghana News Agency that they had spoken with the people in queue but to no avail adding that they ensured the distance was observed near the equipment where the actual registration takes place.

They said as at 1200 hours a total of 30 people had successfully registered and therefore urged prospective voters to exercise patience and observe all the protocols for their safety and that of the officials.

At about 0950 the GNA got to the Twedaase JHS centre, people were seen arguing among themselves about who came first.

The police personnel on duty at the centre was however able to resolve the issue and guided them into seating in queue while the aged were given special places to seat as they await their turn to register.

Mr Kennedy Kojo Konadu, Registration Officer at the centre, explained that some of the people said they reached the centre as early as 0500 hours and therefore decided to give themselves numbers leading to the little confusion.

He said 12 persons had registered out of which five used guarantors.

Mr Okyere Obeng, an aged who was at the centre to register, said education on the registration was not enough as he stated that he was not aware that the EC would have a special centre at its Metro office for the aged and vulnerable.

At the Republic Road School in the Tema Central Constituency, a number of people were seen seated with some seating in groups and others chatting freely with their friends ignoring social distancing rule.

Even though electoral officials were tight lipped about some hitches recorded at the two centres, the prospective voters said one of the centres had electricity challenges as the prepaid card ahs run out of credit.

The other centre also had a non functional machine as a technician was called in to rectify before the exercise started.

All centres visited had veronica buckets for hand washing as well as hand sanitizers and officials were in gloves and masks.