Why the African Union has failed to 'silence the guns'. And some solutions

By Chris Changwe Nshimbi - The Conversation 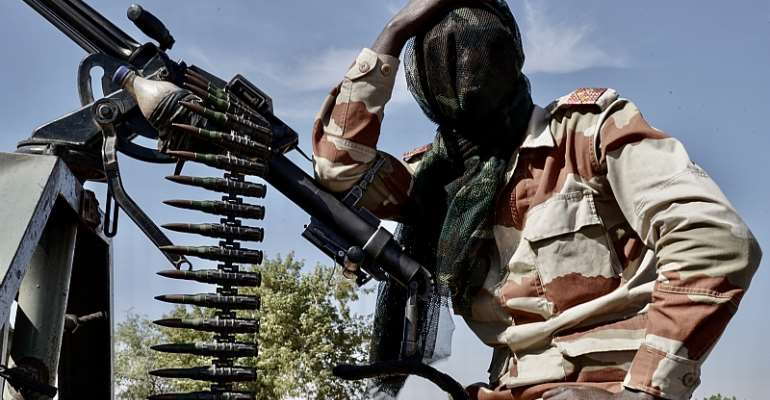 A soldier from Niger patrols near the border with Nigeria. Porous borders with Nigeria and Mali are hotbeds for Jihadists and marauding local militias. - Source: Giles Clark/GettyImages

Seven years ago African leaders committed themselves to working towards an end to armed conflict. As they marked the 50th anniversary of the founding of the African Union they swore to ensure lasting peace on the continent. They pledged not to bequeath the burden of conflicts to the next generation of Africans.

The pledge was followed by the adoption in 2016 of the Lusaka Road Map to end conflict by 2020. The document outlined 54 practical steps that needed to be taken. They focused on political, economic, social, environmental and legal issues. They ranged from adequately funding the African Standby Force for deployment, to stopping rebels or insurgents and their backers from accessing weapons. Other steps included fighting human trafficking, corruption and illicit financial flows.

The efforts to 'silence the guns' has been singularly ineffective. Since the pledge was signed conflict in Africa has increased .

One reason for the failure is that the 2020 goal was too ambitious given the number of conflicts on the continent. The second reason is that many are internal, arising from the grievances citizens have with their governments. This internal dynamic appears to have been ignored from the outset.

To make some headway the African Union needs to recognise this, and design solutions to conflicts that are informed by the need to protect human rights. The continental body should be empowered to act against any party that violates core values centred on human dignity.

Prominent conflicts by non-state actors include the Tuareg separatist and jihadist insurgencies in Mali, Boko Haram in Northern Nigeria, jihadist and militia insurgencies in Burkina Faso, al-Shabaab in Somalia, and the ethnic war in the Central African Republic.

The most notable civil wars are those in Libya , South Sudan and the one waged by Anglophone Ambazonia separatists in Cameroon.

Most conflicts are generally centred on these areas:

Though domestic, most of these conflicts tend to be cross-border in form . They threaten interstate and regional stability. For example, al-Shabaab in Somalia exploits porous borders to carry out deadly attacks in Kenya.

Most of Africa's conflicts are also increasingly characterised by violent extremism. The emerging conflict in the Cabo Delgado Province in Mozambique falls into this category.

The African Union has put a great deal of emphasis on promoting peace, security, and stability in Africa , including in its Agenda 2063 adopted in 2015.

But peace and security continue to elude the continent. Some conflicts have been raging for decades. These include fighting in the Western Sahara , conflict in the Maghreb region involving the Al Qaeda in the Islamic Maghreb , the Somali civil war , and the Allied Democratic Forces and Lord's Resistance Army insurgencies in Uganda and the DRC.

Eighteen years ago the African Union changed its Constitutive Act , allowing it to intervene in the internal affairs of member states. Nevertheless, it's been reluctant to do so. For example, it is conspicuously absent while bloody conflict escalated in Cameroon and Libya .

There has been one notable exception: the organisation's refusal to countenance the coup in Sudan, and suspending the country's membership in June 2019. This should be the norm.

But this highlighted the AU's double standards. It tacitly countenanced the coups in Egypt in 2013 and Zimbabwe in 2017.

Although it did suspend Egypt after the coup led by Abdel Fattah El-Sisi, it subsequently restored its membership in 2014, and went on to make President El-Sisi its rotational chairman in 2019. This went against its own rule that bans coup leaders from occupying political office.

The organisation never suspended Zimbabwe over the coup that ended Robert Mugabe's despotic presidency. Neither did it speak out against General Constantino Chiwenga , the coup leader, becoming the vice-president .

Another example of failure has been in Libya, where the AU has been seen to be wringing its hands while deadly conflict escalates and external actors make it their war theatre. These include Turkey , Egypt, Russia and United Arab Emirates.

The presence of foreign military forces on the continent is of concern beyond the Libyan conflict. The increasing number has been recognised by the the African Union Peace and Security Council as a problem.

The numbers are going up via bilateral agreements between African states and foreign governments.

The foreign actors establish themselves in Africa to protect their economic interests and for strategic reasons . Djibouti, for instance, is strategically close to the Middle East and the Red Sea.

The African Union should revisit its Constitutive Act to address principles that limit its ability to intervene in conflicts in member states' territories. This will set the stage for crafting robust legislation, policies, institutions and mechanisms for long-term stability in such countries.

Following that, the organisation should work through regional economic communities and people at grassroots to end conflict. Its eight recognised regions should emulate the successes of the Economic Community of West African States .

The regional bloc occasionally gives early warnings of brewing conflicts in member states. It has also provided military support and helped reform the security sector in Sierra Leone , The Gambia and Liberia . It has also helped with post-conflict reconstruction in these countries.

Notably, its military intervention in The Gambia forced the despotic Yahya Jammeh to vacate office in early 2017, after losing the presidential elections.

Ordinary people can also provide vital information to early warning systems. It's thus imperative to set up long-term, people-centred, innovative and inclusive measures to promote peace. Such bottom-up solutions, based on intimate knowledge of local areas, are key to success.

Finally, the issue of foreign military forces on the continent. Here the African Union has no control over their growing presence because they come through bilateral agreements between member states and foreign powers. Nevertheless, the African Union should work through its regional organisations to play a role in these decisions.

There's a precedent: the Southern African Development Community under the chairmanship of late Zambian President Levy Mwanawasa opposed the establishment of an American base in the region. Southern Africa went on to establish its own regional military brigade instead.