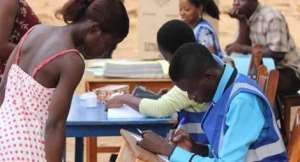 The new voter’s registration process in the Upper West region has been delayed for close to two hours.

Regional EC director told the media in the region Monday that materials have been dispatched to various centres and the process would begin at exactly 7 am.

But as at 8:20 am Tuesday, Starr News’ Morris Bannawini reports that registrants were loitering about.

Calls to the regional EC director for explanations have also not been responded to.

“As we speak up till now, people are not being attended to by officials of the EC. I have visited some registration centers in the Wa municipality this morning. Almost twelve polling stations where the exercise was supposed to kick-start at 7am, as we speak we have not seen any EC officials at these polling stations.”

He explained “per what the regional director of the EC told me media yesterday, the exercise was to start at 7am. We were also told that electoral materials have been dispatched to the various districts and municipalities in the upper west region.”

“So it is surprising to see at these polling stations, no EC official is seated to start the registration. Some of the registrants here are stranded.”