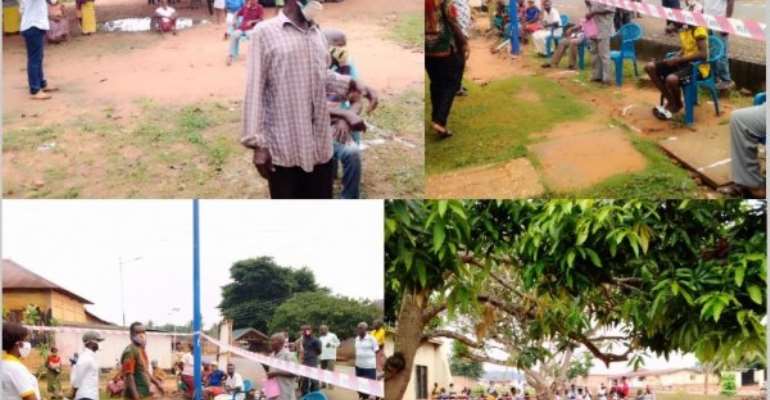 Voter registration commenced late in all Alavanyo towns due to late set up in the Hohoe Municipality.

A visit by the Ghana News Agency (GNA) to some communities saw people in queues while no eligible voter had gone through the registration process as at 0740 hours at the Alavanyo Abehenease, Agoxoe and Wudidi polling stations.

At the Alavanyo Abehenease United Primary School, there were about 25 people in queue as at 0750 hours with one about to go through the registration process, while all safety protocol materials, a police officer and a health officer were present.

Mr. Randy Adzato-Ntem, a registration officer, told the GNA that all materials were available for smooth registration process, adding that the Commission would not allow people who were not in face masks to join queues.

The Roman Catholic (R.C) Chapel polling station in Alavanyo Agorxoe was relocated because the chapel was under lock and key when registration officers got to the centre, which had delayed the registration process.

Mr. Stanley Agbesi, the National Democratic Congress (NDC) polling agent at the Centre, said all materials were available except A4 sheets which were brought later, adding that all measures were put in place to ensure COVID-19 safety.

At the Alavanyo Wudidi St. Mary's Nursery and Kindergarten R.C School, a lot of eligible voters were in queue waiting anxiously and agitated to be registered, since no one went through the process as at 0800 hours when GNA got to the Centre.

Mr. Yevu Kwaku, a pensioner who got to the Centre around 0500 hours and was the first in the queue expressed his displeasure about the delay in the process, adding that the weather was unfavourable and feared many people would not go through the process before the registration ends at 1700 hours.

Mr. Fiakpui Markson, the New Patriotic Party (NPP) polling agent at the centre said all materials needed for the process had been received and the party agents were allowed to check them before the commencement of the process.