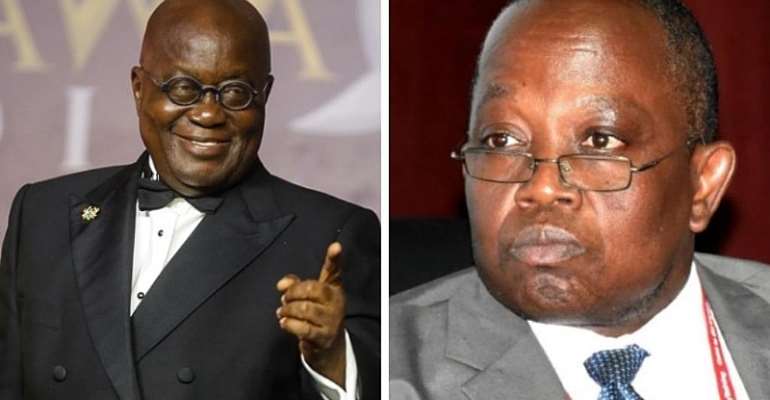 The Dynamic Youth Movement of Ghana (DYMOG) has accused President Akufo-Addo of abusing power by ordering Auditor-General Daniel Yaw Domelevo to proceed on his accumulated leave.

According to the group, Mr Domelevo has displayed sterling performance in the discharge of his duties as Auditor-General.

“All well-meaning anti-corruption crusaders including DYMOG, recognise his peerless contribution and we shall forever remember him,” the group said in a statement.

The President, in his letter, said Mr Domelevo must take his accumulated annual leave of 123 working days effective Wednesday, 1 July 2020.

A statement released by the office of the President and signed by the Director of Communication, Mr Eugene Arhin, on Monday, 29 June 2020, said: “The President’s decision to direct Mr Domelevo to take his accumulated annual leave is based on Sections 20(1) and Labour Act, 2003 (Act 651), which apply to all workers including public officeholders such as the Auditor-General.”

Per the Act, “a worker is entitled to annual leave with full pay, in a calendar year of continuous service which cannot be relinquished or forgone by the worker or the employer”.

However, since Mr Domelevo’s “appointment as Auditor-General on 30 December 2016, Mr Domelevo has taken only nine working days of his accumulated annual leave of 132 working days.”

The statement made reference to 9 April 2009, when the third President of the 4th Republic, Prof John Evans Atta Mills, directed the then-Auditor-General, Mr Edward Duah Agyeman, to take his accumulated annual leave of approximately 264 working days.

It further continued: “President Akufo-Addo paid attention to the precedent in directing the Auditor-General to take his accumulated annual leave of 123 working days”.

Mr Domelevo “has been further directed to hand over all matters relating to his office to Mr Johnson Akuamoah Asiedu, the Deputy Auditor-General to act as Auditor-General” until his return.

But DYMOG said: “It's regrettable that 'precedence' was the principal decision-making factor for this move by the President. It is largely expected that other more compelling reasons, such as moral misconduct or incompetence, would have informed directives of this nature”.

“The President's meddling in disagreements between the Auditor-General and his Board Chairman portrays the measure of value he places on the unimpeachable work of Mr Daniel Domelevo”, DYMOG said.

“We consider the directive to Mr Daniel Domelevo to proceed on accumulated leave, an affront to the anti-corruption community and a well-calculated derailment to the much-needed agenda to exterminate corruption within our public sector”, the group asserted.

It continued: “The President has incessantly spoken about his quest to fight corruption in Ghana. It's, therefore, counter-intuitive that the President will let go of Mr Domelevo, who has demonstrated, beyond reasonable doubt, his abhorrence for corruption. Without ambiguity, we, at the Dynamic Youth Movement of Ghana, find this move by the president as a case of complete abuse of power and her ugly sister authoritarianism.”

Komenda factory: "Mahama constructed the roof before buildin...
6 minutes ago