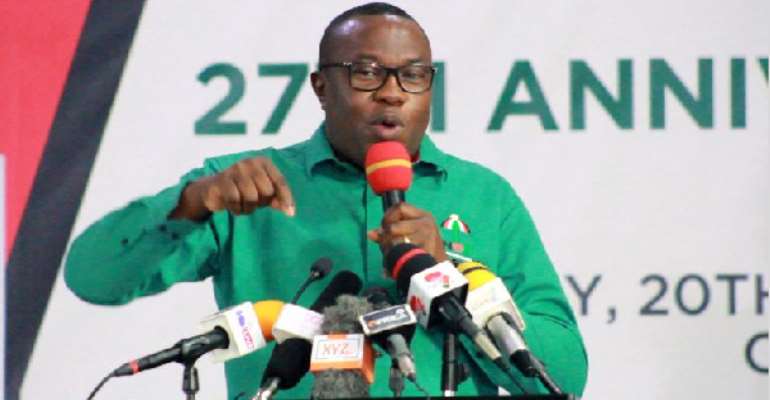 He said meanwhile a pastor and some ordinary citizens have been jailed for similar offences.

President Nana Akufo-Addo, at the weekend, told members of the NPP that they must not break the COVID-19 safety protocols again as they did during the parliamentary primaries on Saturday, 20 June 2020.

In his acceptance speech at the party’s ceremony to acclaim him as the presidential candidate for 2020 on Saturday, 27 June 2020, Mr Akufo-Addo said: “My dear friends and colleagues, this past weekend, our party came to the end of the processes that we have to go through to prepare for the elections in December with the primaries in constituencies, where we have sitting MPs”.

“Unfortunately, in our enthusiasm and sheer unbridled joy, we broke some of the COVID-19 safety protocols. It should not happen again”, he warned.

However, speaking in an interview with Kwabena Bobie Ansah on Accra100.5FM’s Citizen Show on Monday, 29 June 2020, the National Chairman of the NDC said: “A pastor has been jailed for breaking the President’s Executive Instrument but why do you watch your own people break your own rules before you just condemn it? It’s hypocrisy”.

According to Mr Ofosu-Ampofo, “The police just walked about at the primaries and did nothing, only for you to come and condemn it”, adding: “Governance and leadership is not an easy thing”.

He, thus, asked the President to release the jailed pastor and the others, and, in like manner, “just condemn them” for breaking the protocols as he did to the NPP members.

“It’s a selective application of your own executive orders. You can’t govern a country like that”, Mr Ofosu-Ampofo insisted.

Fuel price increases: Akufo-Addo, Bawumia callous about the ...
58 minutes ago

Cape Coast Airport will be constructed at all cost - Akufo-A...
58 minutes ago