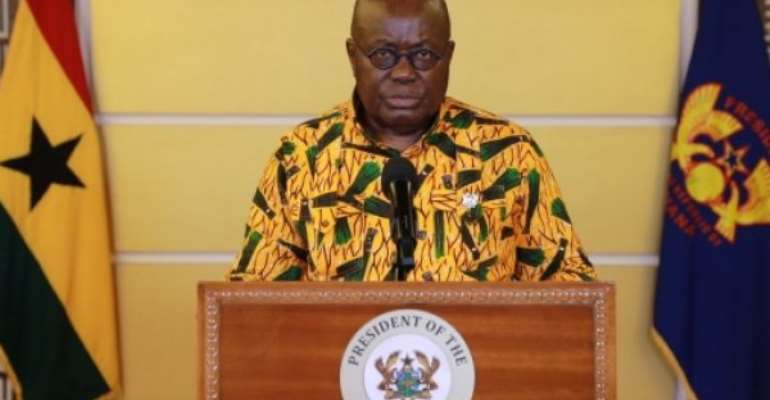 “The election on 7th December must be a Ghanaian election, not a West African election, conducted with a voters' register of Ghanaians. That is the only way the true will of the Ghanaian people can manifest,” President Akufo-Addo stated in broadcast to the nation on the eve the commencement of the compilation of a new voters'register.

“It is crucial that both the registration exercise and the electoral process itself be conducted in an atmosphere of peace and security, devoid of intimidation and violence.”

The President stated that the Ghanaian people must go about the exercise of their civic duty in peace and in freedom.

“The security agencies have assured me that they have made adequate preparations for this, and to guarantee the sanctity of the process. They have assured me of their determination to carry out their duties with fear or favour,” he said.

“Improper behavior by any citizen, no matter what their political colour, not be tolerated, and I am encouraged by the recent reassurance by the Inspector General of Police that Police have been instructed to be even-handed in their response to issues.”

President Akufo-Addo reiterated that that was the only way the rule of law could be upheld.

“It is no secret that our neighbor in the north, Burkina Faso, has, in recent times, been at the receiving end of a number of terrorists attacks, as has another neighbour, Cote d'Ivoire,” he said.

“To shore up our borders against such attacks, and to defend of nation's territorial integrity, the Armed Forces, at least since I came into office, have been very proactive in engaging in operations to secure our borders, and foil any potential terror attacks on our soil.”

He said operations such as “Conquered Fist and Koudangou” had been going along for some time, since 21st February, 2019, to meet this objective.

He said deployment of soldiers in areas along the nation's borders had been regular, and residents living in border towns would bear testimony to this.

President Akufo-Addo said again, in the fight against COVID-19, he took the decision, on Saturday, 21st March, to close all the nation's borders by land, air and sea.

To ensure substantial compliance with this directive, and to assist personnel of the Immigration Service, our Eastern, Western and Northern borders were shored up by soldiers.

He noted that this development, for example, during the period of three-week lockdown of Accra, Tema, Kasoa and Kumasi, led to the arrest of some 5,000 persons along our borders, who had entered our country illegally.

“Indeed, the first six recorded cases of COVID-19 in the Volta Region, for example were those of West African nationals, who entered the country illegally,” he said.

The President explained: “Let me state, without any form of equivocation, that these deployments are not in any way intended to intimidate or prevent eligible Ghanaians from registering to vote in December.”

He said the soldiers were there for an expressed purpose, which was to guide our borders; adding that that was the limit of their remit, and they would not permitted to stray that remit.

“I am fully aware, like the military commanders, of the sensitivity of their deployment at this point in our history, and I am confident that that sensitivity would be fully respected,” he said.

“I have no interest in disenfranchising any eligible Ghanaian from registering in tomorrow's exercise, nor am I interested in any improper machinations to win any elections. I have spent my life fight for free, democratic institutions in our country and I will continue in that fight for the rest of my life.”

“The idea of being a President, who emerges from rigged election, is abhorrent of my being,” he said.

“I want to continue to be the President of a Ghanaian people, who have given me their free concert, with the blessing of the Almighty.”

He appealed to Ghanaians, who were18 years of age and above, and were of sound mind, from tomorrow, or the appointed time, go to their respective polling station and register.

Hottest Photo Reports
Catch up with all the political quotes from our politicians.
Advertise here
More Headlines
ModernGhana Links
I'm sorry, was running away from a prophecy that I'll be shot on October 18 – Shatta Wale apologises for faking gun attack
Police comb for Shatta Wale after reportedly shot
We Will Not Allow Anyone To Cheat Us In 2024 Elections — Mahama
Assemblies of God supports anti-LGBTQI+ Bill in a memo to Parliament
31.2km Assin Praso Assin Fosu road to be completed in November 2023
Your head should be properly examined if you think we'll sit down to be brutalised, murdered in 2024 elections again – Elvis Afriyie-Ankrah
Cape Coast Airport will be constructed at all cost - Akufo-Addo
‘We won but soldiers forced EC to declare results in NPP’s favour’ – Mahama
Komenda factory: "Mahama constructed the roof before building the foundation" - Akufo-Addo
TOP STORIES