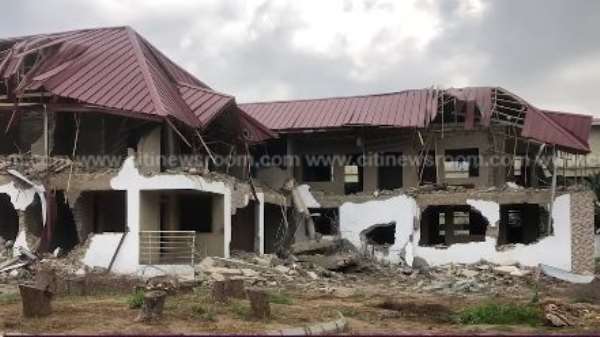 The government of Nigeria says the demolition of the building within its High Commission premises in Accra can be blamed on its failure to acquire the legal title for the parcel of land the structure has been built on.

Foreign Affairs Minister in Nigeria, Geoffrey Onyeama has therefore described the circumstances leading to the destruction of the property as “an error on our side.”

According to the Minister, their officials in Ghana erred in ensuring that, the required documents were obtained before going ahead with the construction, Nigeria’s news portal, ‘ The Nation ‘ has reported.

“It was clearly a mistake on our side. What the Ghanaians said is that owing to the fact that our High Commission did not obtain a lease, following the allocation letter they got after paying for the plot of land, nor did we proceed to obtain a land title certificate and we didn't even get a building permit for the new property. When other people came claiming ownership of the land, the commission did not see anything in the register because the lease title had not been obtained. It is clearly an error on the side of our High Commission”, the Minister, according to The Nation website said while briefing reporters over the issue.

Parts of the one-story structure belonging to the Nigerian High Commission in Ghana, located at Osu Ringway in Accra were destroyed on Friday, June 19, 2020.

This was after armed men reportedly invaded the premises and destroyed buildings under construction.

Later on, the Osu Traditional Council took responsibility for the demolition and accused the Nigeria High Commission of trespassing on its land without a legal title.

The parcel of land said to be owned by the Osu Stool and leased to the Nigerian High Commission in 2000 is allegedly being forcibly taken over by a private individual with the knowledge of the Lands Commission.

But this the Nigeria Foreign Affairs Minister has admitted the error and has assured that the necessary processes are being taken to remedy the impasse.

“We would learn from that. But clearly, our documenting and record-keeping and processes would need to be sharpened. In terms of how we deal with our officers, this is something that happened in 2000. That was 20 years ago. The officials are no longer in service. We rather just learn from our mistake and ensure we have more rigour whenever we are engaging in legal issues in all our missions.”

“The Ghanaian government has directed the necessary administrative procedures that were not followed should be done now, meaning that title deeds be formerly given to the High Commission of Nigeria since the documentary proof acknowledged by the Ghanaian land registry of receipt of payment on the property has been done many years ago”, he added.

What the demolition caused

The incident incensed Nigerians in Ghana who later held a demonstration to express their outrage.

President Akufo-Addo has apologised to his Nigerian counterpart, Muhammadu Buhari, following the demolition.

So far, two persons have been arrested over the incident and charged with unlawful entry and causing unlawful damage.

Earlier, Ghana’s Minister for Foreign Affairs, Shirley Ayorkor Botchwey said the government of Ghana will ensure that the demolished structure on the compound of the Nigeria High Commission 's residency is rebuilt as soon as possible.

According to her, the High Commission duly paid for the parcel of land, hence any encroachment on the property constituted a breach .

Shatta Wale to spend another night in police cell; to face c...
45 minutes ago