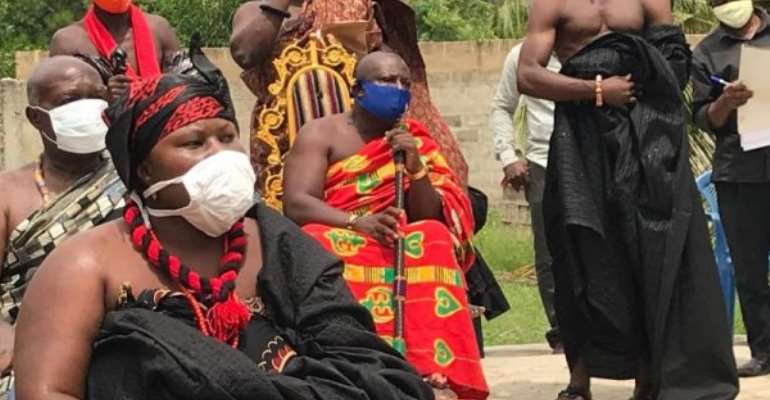 He also asked the President to ensure that the people went about their daily activities without hindrances.

The paramount chief made the call at a News conference in his palace at Aflao following the deployment of security personnel along the Aflao-Lome border.

He said the presence of the troops started causing fear and panic amongst the inhabitants when they embarked on house to house searches and “brutalizing of motor bikers within the towns.”

Togbe Fiti said the harassment of citizens occupying the border towns was having detrimental effects on agriculture and socio-economic activities.

“Brutalizing of innocent civilians is frown on by the Constitution of Ghana. Even Prisoners of War are protected by The Hague Convention let alone civilians going about their lawful business,” he added.

Togbe Fiti said the Government could not “allow its troops to brutalize its own citizens without recourse to justice whilst lamenting George Floyds' passing at the hands of a white police officer in Minneapolis (USA),” adding that they were peace loving and believed in Ghana's "Freedom and Justice” for all.

He said the Aflao Traditional area supported the Government in its implementation of protocols to prevent the spread of Covid-19 and that the Municipal Security Council was on top of the situation and did not need military deployment.

Togbe Fiti said it should be noted that “silence in the face of brutality...only goes to embolden the aggressor.”

Togbe Fiti lamented that though Aflao was the second populous town in terms of population after Ho in the Volta Region, and generated 'good' revenue to the state apart from the Tema Harbour and the Kotoka International Airport, the border town with over 70,000 population continued to be denied developmental projects.

He said those who were fortunate to get jobs in Lome (Togo)-the Kayaye and truck pushers were “languishing at home” due the border closure and appealed to the President to heed their call.

Meanwhile, the National Democratic Congress (NDC) at an earlier News conference at Aflao said it was needless to deploy the military to the eastern border towns and asked government to recall them.

The Party urged the locals to come out to register and vote in the December polls.