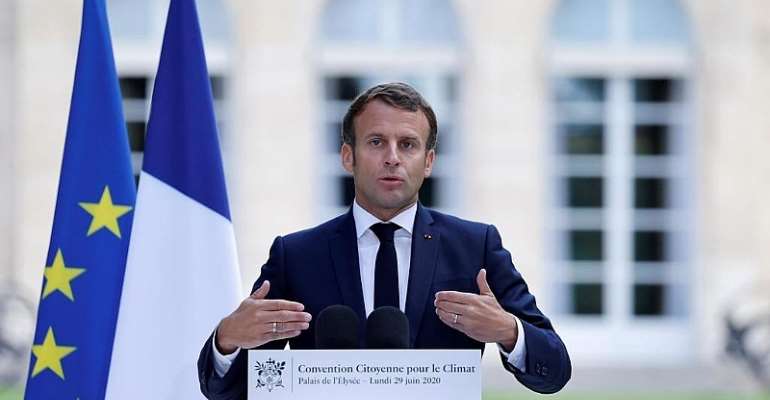 A day after a powerful push by the Greens in French municipal elections, President Emmanuel Macron on Monday vowed to speed up environmental policies – promising an extra €15 billion to fight global warming over the next two years, and throwing his support behind two referendums on major climate policy.

Macron was responding to proposals put forward by the 150-member Citizens Climate Convention (CCC), a lottery of French people chosen to debate and respond to the climate challenges facing society.

During a meeting in the gardens of the Elysée Palace, Macron told convention members that he accepted all but three of their 149 recommendations which would, he promised, be delivered to parliament “unfiltered”.

Most notably, Macron said he was ready to call a referendum on making “ecocide” a crime. Defining ecocide as any action causing serious environmental damage, the CCC proposed it be punishable by prison and a fine of up to 10 million euros.

In addition, the president also supported a referendum on writing climate goals into France's constitution, although he opposed the idea of a preamble that put environmental values ahead of those of the republic. With the backing of parliament, both proposals would be put to a referendum in 2021, he said.

Macron also supported a “stop the concrete” moratorium on new commercial zones on the outskirts of French cities.

Democracy experiment
An initiative that's been hailed an “unprecedented national exercise in participatory democracy”, Macron in September gave the CCC the task of defining climate measures that would allow a reduction of “at least 40 percent of emissions by 2030…in the spirit of social justice”.

"You have shown that it's possible on even the most difficult, flammable subject to create consensus,” he told the CCC on Monday.

While congratulating them for putting ecology “at the heart” of France's “economic model”, Macron rejected the CCC's proposal of a 4 percent dividend tax on investments to help finance greener policies.

He also postponed a debate on whether to introduce a 110km/h speed limit on French roads, arguing the country's ecological transition should not be to the detriment of its landlocked municipalities.

Macron said he hoped the CCC's measures – grouped under the themes of housing, transport, food, consumption of natural resources, production and work – would be rapidly implemented, with a new law drawn up before the end of summer.

Sweeping wins by the Greens in towns and cities throughout France in Sunday's elections have piled further pressure on Macron to act on the environment. His ruling LReM party was defeated in all major cities, leaving him without a local power base ahead of his presidential re-election bid in 2022.

The last time the French were called to a referendum was in 2005, when they decisively rejected a constitution for Europe. Since then, no head of state has risked soliciting the will of the people.