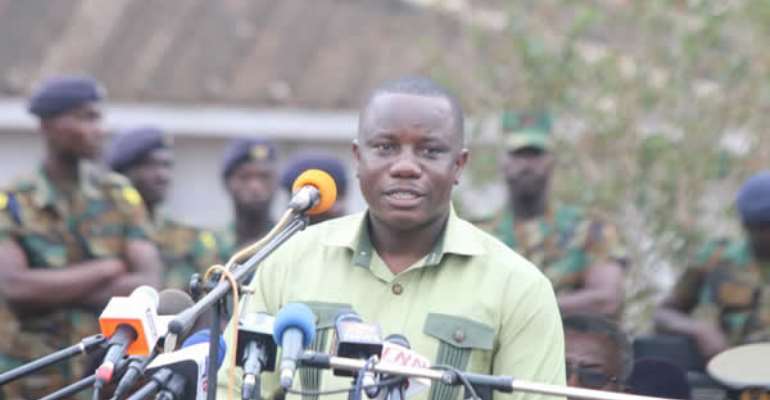 The Defence Minister, Dominic Nitiwul has described as ‘pure mischief’ and propaganda claims by the National Democratic Congress (NDC) that the government has deployed military officers whyspecifically to the Volta Region to intimidate them from registering to vote in the 2020 general elections.

The Minister, at a press conference on Monday, said the deployment of soldiers is part a nationwide exercise to stop the immigration of people into the country through unapproved routes in a bid to stop the importation of COVID-19 cases.

He said similar deployments had been done in the Savannah, Northern and Upper East regions as well.

“I want the people of the Volta Region to know that the information the NDC, Minority and former president John Mahama are feeding them is pure propaganda. It should be ignored. It is pure mischief. We have deployed [soldiers] across the entire country and the purpose is to aid and support the Ghana Immigration Service to stop people from crossing [in] because we have too many unapproved routes and the COVID-19 numbers are getting higher and higher and we will not sit aloof and allow our people to die because people are crossing into our country,” the Minister said.

The Minister said there is no agenda against any tribe in the country as is being suggested by persons who are accusing the government of targeting Ewes in the Volta Region for intimidation in the run-up to the 2020 elections.

He said the ultimate purpose of the deployment is to check crime and illegal immigration, which puts the country at a health risks amidst the COVID-19 pandemic.

“For the people of Ghana, they are concerned about their health. It is my duty to make sure that the people of Ghana are safe and at this particular time we are all in danger so you will have seen the deployment we have done across the whole country and for anybody to suggest that we just deployed only to Aflao or the Volta Region is misplaced, it is misinformation and the person is only seeking mischief,” he added.

The National Democratic Congress (NDC) had earlier on Monday has slammed the governing New Patriotic Party (NPP) for deploying military personnel to border towns in the country.

At a press conference addressed by the Member of Parliament for Ketu South, Fifi Kwetey, the deployment was undoubtedly “timed to coincide with the commencement of the Voter Registration exercise across the country” from tomorrow, Tuesday.

The party subsequently gave a 48-hour ultimatum for the government to withdraw the personnel.

The voter registration exercise is scheduled to begin on Tuesday, June 30.