Virus death toll passes 500,000 as US and Brazil cases surge

By Daniel Lawler with AFP bureaus 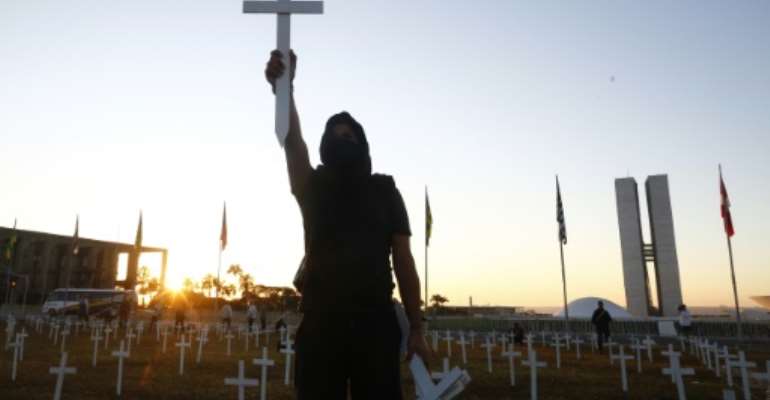 One of thousands of protesters demonstrating across Brazil against the pandemic response of President Jair Bolsonaro. By Sergio LIMA (AFP)

The global death toll from the coronavirus pandemic has topped half a million, as surging cases in Latin America and the United States prompted some authorities to reconsider lifting lockdown measures.

In another grim milestone, the number of infections recorded worldwide rose to more than 10 million, according to an AFP tally, complicating efforts to ease restrictions on debilitated economies.

Los Angeles ordered its bars to close again on Sunday as COVID-19 rampages across the US, which has recorded more than 125,000 deaths and 2.5 million cases -- both around a quarter of the global totals.

The second hardest-hit country Brazil registered 259,105 infections in the seven days through Sunday -- the country's highest of any week during the pandemic. 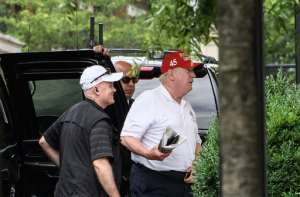 US President Donald Trump is under growing pressure to set an example by wearing a face mask. By NICHOLAS KAMM (AFP)

The latest figures came as protesters in cities across Brazil -- and as far away as Stockholm, London and Barcelona -- held demonstrations against President Jair Bolsonaro, who has said the virus is akin to a "little flu" and railed against stay-at-home measures.

"Brazil is suffering immense pain, a hidden pain that throbs in the face of the incredible numbers of deaths caused by COVID-19," the organisers of a protest in the capital Brasilia said.

As bars closed in LA, Ireland's pubs began pouring pints for the first time in 15 weeks, as Europe -- still the hardest-hit continent -- continues to open up after seeing numbers of new cases fall. 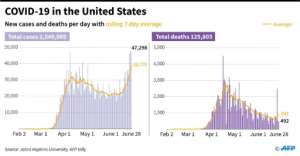 New cases and deaths per day from coronavirus in the United States. By (AFP)

"Guinness is good for you," quipped Mark O'Mahony -- the first to order a pint with his breakfast at a Dublin pub. "Without it, it hasn't been much good really for 15 weeks."

In nearby Britain, Prime Minister Boris Johnson said his country had gone through a "profound shock" as he prepared to unveil a large stimulus programme.

"I think this is the moment for a Rooseveltian approach to the UK," Johnson said, referring to former US president Franklin D. Roosevelt's New Deal economic response to the Great Depression.

The British government still plans to reopen pubs, restaurants and hairdressers across England on July 4, even as it warns it may have to shut down the city of Leicester because of a spike in cases. 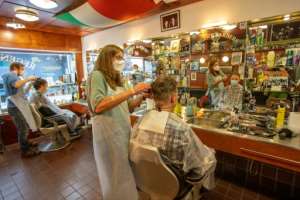 Hairdressers opened for the first time in months in Ireland on Monday. By Paul Faith (AFP)

The Middle East's most affected country Iran reported 162 more deaths on Monday, its highest single-day toll yet, a day after the country made mask-wearing mandatory for inside gatherings.

Iran has progressively lifted restrictions since April, but supreme leader Ayatollah Ali Khamenei warned that "momentum and effort has waned among some of the people and authorities" to combat the virus.

Many of the south and west US states where the virus is most rampant are where state leaders had pushed for early economic reopenings.

President Donald Trump is under growing bipartisan pressure to set an example by wearing a face mask as his health secretary warned the "window is closing" for the country to gain control of the situation.

California's governor had already ordered some areas to reinstate stay-at-home orders ahead of closing bars in Los Angeles and six other counties on Monday. 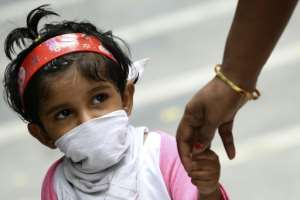 India is gradually easing a nationwide lockdown despite setting a daily record of 18,500 new cases and 385 deaths on Saturday. By SAJJAD HUSSAIN (AFP)

Miami meanwhile announced beaches would close over the July 4 holiday weekend and bars are also shutting their doors.

China, where the virus emerged late last year, was also forced to bring back previously lifted restrictions, imposing a strict lockdown on nearly half a million people in a province surrounding Beijing to contain a fresh cluster.

India, which is gradually easing a nationwide lockdown, registered a daily record of 18,500 new cases and 385 new deaths on Saturday.

Alka, one of the country's million accredited social health activists, or ASHAs, said it was difficult for the unprotected and poorly paid all-women workers to get people to heed their advice.

"People are struggling to feed their families," she said. "What can we do?"