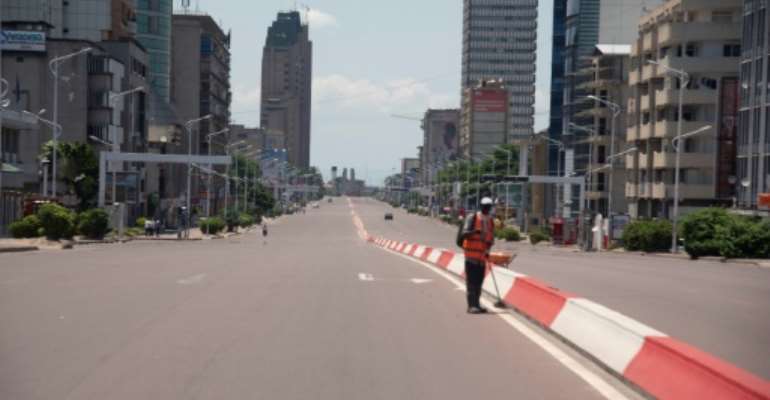 Gombe during lockdown. The district is an island of prosperity in a city rife with poverty and dysfunction. By Bienvenu-Marie Bakumanya (AFP/File)

Authorities in DR Congo's capital Kinshasa Monday opened up the posh business district of Gombe which had been sealed off in April to contain the spread of the coronavirus.

Access to Gombe, which houses the country's main institutions, banks and foreign embassies as well as upscale homes, was barricaded to everyone except local residents and key workers on April 6.

Kinshasa Governor Gentiny Ngobila had then justified the move saying the district was considered to be "the epicentre" of coronavirus spread in the city.

There have been 6,827 registered cases of COVID-19 in the Democratic Republic of Congo, of which more than 6,000 occurred in Kinshasa. The death toll nationwide stands at 158.

Gombe, home to 100,000 to 200,000 of Kinshasa's 10 million people, has been dubbed "the Republic of Gombe" for its perceived status as an island of prosperity in a city rife with poverty and dysfunction.

An AFP journalist said barricades that had been erected to keep non-residents and key workers had been lifted on Monday.

Kinshasa governor Ngobila on Sunday however urged the city's residents to limit their movements and wear masks all the time in public.

Shops, cafes, bars, restaurants and government offices have reopened in Gombe but the central market there remains closed.

Shopkeepers on Monday staged a protest outside the town hall, calling for its reopening.

DR Congo's borders remained sealed while Kinshasa has been isolated from the rest of the country. Schools, universities and places of worship are also closed.