The Crime Of The Thumb: Are The Bribing Aspirants And The Extorting Delegates Culpable? 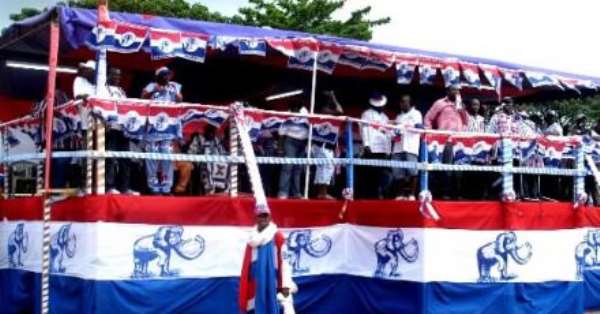 I was at one of the polling stations at the recently held NPP Parliamentary Primaries. Among the many observations, one thing that struck my interest was the act of extortion, which is a criminal offence in Ghana. This polling station is found within the Agona West Municipality. It had an electoral album of 31 delegates, with one of them being under suspension.

The voting started at exactly 7:00am and the poll was expected to be adjourned at 1:00pm. As at 9:47am, though I countered about 15 purported delegates at the polling centre, only three of them had actually voted by that time. One of the delegates told me that they were waiting for the aspirants to bring them money before they would vote or at least promise them money or other valuable consideration before they would exercise their franchise.

This delegate mentioned the names of certain aspirants who allegedly shared gas cooker, flat screen television sets and undisclosed amount of money. As the conversation continued, one question ran through my mind, as to whether they knew that such acts constitute a criminal offence.

Section 151 of the Criminal Offences Act, 1960 (Act 29) stipulates that "a person who extorts property from any other person by means of threats commits a second degree felony". “Property” in this sense means money, items such as television sets, gas cookers and other valuable consideration.

When a voter threatens to vote against an aspirant unless the aspirant pays or promises to pay a sum of money or other valuable consideration, that voter (delegate) and secures same, that voter may be prosecuted for extortion. Per Section 296(2) of the Criminal and other Offences (Procedure) Act, 1960 (Act 30), stipulates that a person who commits second degree felony may be imprisoned for up to ten years in imprisonment. However, Section 296(5) of listed a sect of offences under Act 29 which Section 151 is part and prescribes their punishment as imprisonment of more than 25 years.

This means that anyone who commits the offence of extortion under section 151 can serve a jail term of up to 25 years. That's serious, isnt it? Also remember that, "threat" as used under this section has nothing to do with threat of physical harm or assault. Secondly, both Aspirants and Delegates would be in breach of sections 240 and 241 if what I heard by the said delegate is anything to go by.

Sections 240 and 241 of Act 29 create the offences of corruption by public officers and corruption of public officers. The first provision seeks to hold the delegates qua voters for allowing themselves to be influenced by gifts or promises. Section 240 states as:

There are questions we need to answer. Have the Aspirants made promises, gave gifts or other valuable considerations which influenced the choice of the thumb or the voting patterns? In the case of NUHU v THE REPUBLIC (1969) cc 77, a police man failed to arrest a suspect after demanding and accepting a bribe. The Court held that the essence of corruption is agreeing or offering to permit the officer's conduct to be influenced by a gift. It is immaterial if the conduct of the accused was subsequently influenced or not. The implication is that once the Delegates made a demand and agreed to accept or accepted a gift, promise or valuable consideration in order to influence their vote, a crime has been committed.

Section 241 deals with the giver of bribe or corrupter. The Section stipulates as follows:

This is where all our political leaders and other holders of public offices must be held accountable for their corrupt practices. They make promises, offer gifts, give out valuable consideration in a bid to influence voters and other public office holders to vote or act in their favour. It's simply criminal.

As a student of the law, it is my reasonable opinion that, if our Aspirants give out gifts or valuable considerations to influence Delegates to vote for them and the Delegates also accept such gifts, they are both guilty of corruption. Section 239 of Act 29 describes the offences of corruption of and by a public officer or a voter as misdemeanors. Also, section 296(6) of the Act 30 defines a misdemeanor as an offence which has its terms of imprisonment to be not more than 3 years.

There are people who will be fast to think that if demanding or accepting a bribe as a public officer, juror or a voter will constitute a crime, then let me perform the act and come and thank me later. The law says that if you receive any gift, prospect, promise or valuable consideration the act is performed, unless the contrary is proved, it shall be presumed that the acceptance of that gift or valuable consideration is on the account of the act done and that would constitute a crime.

With my experience at the polling station recently, it looks like most of delegates have a prior agreement to allow themselves or their votes to be influenced. The police can look at other inchoate offences such as conspiracy but let me pause here. It will be a topic for another day.

On April 17, 2006, former Governor George Ryan in Chicago was convicted of 18 felony corruption charges and later sentenced to 6 1/2 years in prison.

On 12 August, 2011, Phillip A. Hamilton, a former member of the Virginia House of Delegates, was sentenced today to 114 months in prison for bribery and corruption. Assistant Attorney General Lanny A. Breuer in a release remarked that "For his acts of bribery and extortion, he will now spend 114 months in prison – an example to public officials and the electorate that the Justice Department will vigorously pursue those who abuse their public office. The Criminal Division’s Public Integrity Section and our partners in the U.S. Attorneys’ Offices are committed to rooting out self-dealing by public officials and holding them accountable when they misuse their positions for personal gain.”

Theodore Roosevelt in 1903 speech said "we must show our abhorrence of corruption I'm public and in private life".

I am very much aware that there are opposing views but I'm of a strong view that, if our laws are actually working and don't only exist in the books, then majority of our Aspirants and Delegates should be serving various terms of sentences by now. I'm still thinking aloud.