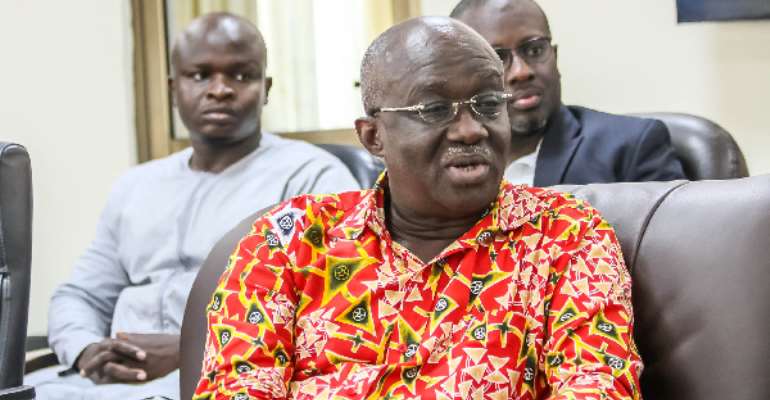 Any player in the political field knows that Hon Joseph Kofi Adda is one of the experienced and smart politician Navrongo have ever had. This is common knowledge even in the camp of the NDC. He is not someone the NDC would want to underestimate, considering his affability with the people on the ground. The Navrongo seat as we know as would have become a safe seat for the NDC but for the influence of Kofi Adda.

The defeat of Kofi Adda in the just ended primaries of the NPP opens a glomming picture of uncertainty for the elephant family in the constituency. The recent held primaries is one of the toughest and acrimonious primaries to have been held in Navrongo. Observers like myself knows very well that the wounds in the elephant family are too deep to heal before the general elections.

A week before the election one lady said, “If they make any mistake and vote for that woman, NPP is dead in Navrongo”. According to her it is the personality and influence of Kofi Adda that made people to vote for the NPP. I couldn’t agree more with her. Should Kofi Adda decide to sit back, it will be very difficult for NPP to ever win the Navrongo seat. Most of the developmental projects in the municipality came as a result of the hard work of Kofi Adda. He is not the kind of person the NPP can easily do away with and hope that things will remain the same. His influence cut across every corner of the constituency; From Natugenia to Naaga.

From Naaga to Kajalo and Manyoro. He is a household name. How do you then give such a person a disgraceful exit and expert his loyal supporters to pretend that all is well when indeed that might not be the case. One delegate told me she will vote for the NDC parliamentary aspirant popularly known as STC.

She said if indeed it is true that the president was behind the defeat of their MP in the primaries and then she will advise herself and her entire family come December. Should his influence wanes in Navrongo, the NPP will have a difficult task of even getting the vote Kofi Adda had for their presidential candidate let alone adding to it. I will support any call for the chiefs of Navrongo to honor our MP for the massive developments we are seeing in the municipal.

Enskinning him Naaba Amalitinga or p3 Akwe Tio. Chief of development wouldn’t be a bad idea at all. Indeed he deserve it. Hmmm but the Kologo – Naaga, the rural electrification started by the NDC is left abandoned. This could be a campaign message for the NDC.

The Forces From Above

Many individuals including poster Ben Epheson expressed shock about the outcome of the NPP primaries in the Navrongo Central constituency. Though the morning of the election he did indicate that it is going to be a tough battle in the Navrongo constituency especially being a contest between two ministers of state. A regional minister and minister for Aviation.

The defeat of Kofi Adda got many individuals wondering if there was any powerful hand behind the scene. But those of us who were quick to reconcile issues saw it when Paulina Abayage was appointed the regional minister. Many people including members of the NPP said, the appointment was made so that she could contest Kofi Adda who is said not to be a favorite of the president. This became evident during the campaign for the primaries and the fact that some senior individuals at the Jubilee house were behind her as it is rumored in the constituency. I supposed a lot happened the night before the elections as recounted by some of the delegates. Money played it role.

The ‘Sins’ Of Kofi Adda

His attempt to fight for developmental projects for the good people of Navrongo has earned him some enemies whose contributions led to his defeat in the primaries. The sins of Kofi Adda many argued started in 2008, others are of the view that it started in 2017.

Although analysis of the issues suggests that the two are all significant hence perving the way for his defeat. Some neutral individuals have had cause to suggest that the events before and during the primaries suggest that most of the people and executives who supported the woman did so not because they felt she could do better than the minister for Aviation but an exhibition of strong hatred and payback time.

The sins of Kofi Adda many suggest is the fact that he was a sympathizer to Alan cash, the current minister for trade and industries. The fallout from the NPP primaries suggest this trend, that some persons were resourced to contest sitting MPs who are perceived to be Pro Kufuor or Alan cash. The dislike for the Navrongo central MP by the current president is seen in his appointment of our darling boy as minister in charge of Sanitation and water and now minister for Aviation.

These appointments has given his opponents, the NDC to make mockery of him considering the fact that these were ministry created to give to people the President did not like but could not do away with because of regional balance. Considering where the minister of aviation is coming from, the president had no option than to give him a ministerial appointment especially when he is among the few NPP MPs from the upper East region.

Another force that worked against the minister was the Bolga factor. Many individuals in the regional capital threw their support for the regional minster because of many reasons. Some individuals from Bolga thought that the MP has hurt them enough. It is common knowledge that over the years the MP had some issues with the people of Bolga especially in relation to the location of projects in the region.

Some radio stations in the capital did not hide their support for the lioness in Navrongo politics. It is rumored that some persons from Bolga came to Navrongo to campaign for her, the fact that the majority of the communities outside the town of Navrongo speak Nankani (FraFra) did help the Bolga folks to easily communicate to the hearts of the electorates in their own language.

Therefore it was not a surprise to many when she beat the MP in most of these communities despite the fact that Kofi Adda has been instrumental in these communities especially Naaga. The Lioness would also want to be careful in the way she conduct herself especially if she wants the support of her colleague women. Some are indeed averse to that lioness aggression with lions. Respect for a man is what they want that tradition should not be lost because of Politics.

The genesis of the current misunderstanding between the municipal chief executive and the MP started in 2017 when Kofi Adda was seen as an obstacle in preventing the MCE from getting his appointment. Even when he was finally appointed by the president, many argued that the MP influenced some assemble members to vote against him. At the time, the MP was in support of one lady who went through vetting with some three others to become the MCE. This development angered many executives of the party at the time when it was realized that the failure to get the president’s nominee confirmed by the assembly was orchestrated by the MP. When the MCE was finally confirmed, many individuals who did not agreed with the action of the MPs and suggested that the MCE should prepare to contest him. This was the plan until the Jubilee house brought in the regional minister. The tussle between the MP and the MCE also created some dislike for the MP by friends and communities that were sympathetic towards the MCE. The MP did not realized that his antagonistic attitude towards the confirmation of the MCE could cause some hatred for him in the Nankani communities who might feel that he was an obstruction to getting their son to become MCE. One cannot underestimate the contribution of the MCE to the defeat of the MP in the primaries having served as a constituency chairman before his appointment as MCE.

Will the defeated MP go independent? From the grapevine, “it is likely until intervention from the jubilee house”. Whatever be the case might be, the buck stops with the MP. But of course, elders in the NPP must be worried, because whether Kofi Adda, or the Lioness, they have Sampson to content with. It is rumored from certain headquarters that Sampson was actually waiting to contest Kofi Adda so that he can beat him to set a record.

If indeed the NPP wants to maintain the seat then they have to do their homework well because the possibility of Sampson taking the seat for the NDC from any of the two is high, considering his affability and the fact he is an experienced politician for many years. The margin of victory between Mahama’s darling boy (Mark Woyongo) then and the current MPs was that significant. If the NDC prepares well, it will be an easy catch for them.

Oops! The underground library, what happens now that JKA is existing?