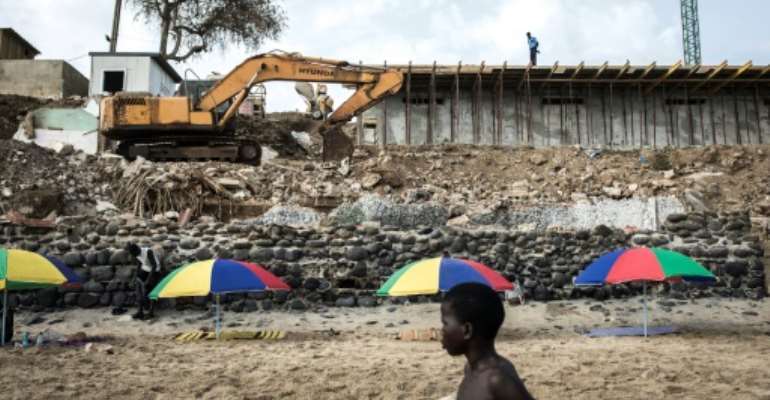 Exploitable land is limited in the rapidly expanding Senegalese capital of Dakar. By JOHN WESSELS (AFP)

It took one morning in late May to cut a large chunk from the side of a seaside volcanic hill in Senegal's capital Dakar, to make way for a hotel.

A man had turned up with permits and diggers got to work, according to Mamadou Mignane Diouf, an official from a local campaign group called Forum Social, who fought against the development.

"No one should build here," said Diouf, who explained that the hill, which supports the city's lighthouse, is a protected site.

Exploitable land is limited in the rapidly expanding West African metropolis of some three million people, which is situated on a peninsula that juts into the Atlantic.

But with open spaces declining, locals are complaining the shoreline is being destroyed, and that developments block their access to some of the last open spaces in the cramped city.

May's incident with the volcanic hill touched a nerve, triggering protests as well as a national debate about how to conserve the shoreline.

'Already a lot of damage'

A Dakar landmark, the seaside hill is one of a pair known as the "Mamelles" -- French for "udders" -- and is already surrounded by building sites.

Local police have stopped the building work, after the uproar, but a large earth-red gouge remains in the hillside.

"They've already done a lot of damage," said Diouf, standing among rubble at the foot of the hill. 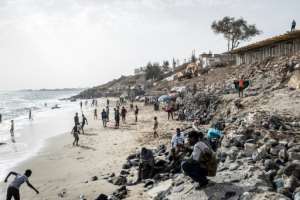 The seaside hill in Dakar is one of a pair known as the "Mamelles" -- French for "udders" -- and is already surrounded by building sites. By JOHN WESSELS (AFP)

"Why do a few privileged people think that only they have the right to access the coast, to privatise it?" he said, reflecting a widely held frustration.

Senegal's urbanisation minister Abdou Karim Fofana told AFP that the government is working on a law to protect the coastline.

But land titles and building permits awarded under previous administrations mean that many ongoing building projects will likely go foward, he said.

Senegal is a poor nation of some 16 million people, where a push for economic development is going hand in hand with growing concern about environmental issues.

'Law of the strongest'

The vast majority of buildings in Dakar are illegal, Gomis said, while many local government officials misunderstand building codes. 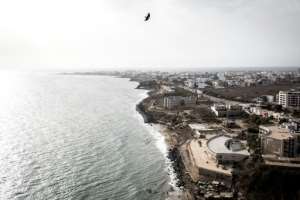 The West African metropolis of some three million people is situated on a peninsula that juts into the Atlantic. By JOHN WESSELS (AFP)

Gomis' local commune, Mermoz-Sacre-Coeur, is currently embroiled in a dispute over an apartment block development beside one Dakar's main open beaches, raising fears that it will be privatised.

The developers have a permit, but they received it from a neighbouring commune.

Gomis and other colleagues in the Mermoz commune insist that the construction site is in their commune. Both local authorities have submitted arguments to the local gendarmerie.

Mermoz mayor Barthelemy Diaz called the project a "blatant attack" on the public domain, which would lead to coastal erosion.

Abdou Karim Fofana, the urbanisation minister, said the government is committed to protecting the shoreline but cautioned that building would be impossible to stop in some cases.

"The damage has already been done, the titles have been given," he said.

The minister added that the government is working on a new law to protect the shoreline, however, while trying to help local authorities properly assess requests for planning permission.

"We have to save the parts (of the coast) that aren't occupied so that the Senegalese and Dakar population can access it," Fofana said.

Local residents are adamant, however, that all building should stop.

Balla Magassa, 43, who runs a small bar on a narrow stretch of beach surrounded by developments -- below the Mamelles -- said he was afraid his patch of sand would one day be engulfed.

"It will spill out," he said, adding that the whole area was once sandy beach.

"It's the law of the strongest," Magassa added.