Oladipo Olujimi Akinkugbe: a giant of medicine in Nigeria, and a great mentor

By Friday Okonofua - The Conversation 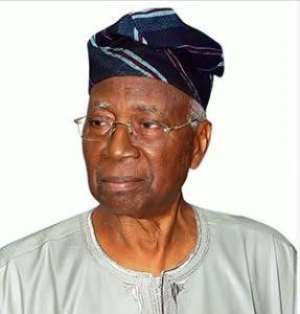 Nigerian Emeritus Professor Oladipo Olujimi Akinkugbe, a medical icon and colossus, was one of the few remaining giants of modern medicine in Africa.

Professor Akinkugbe was born on July 17, 1933 in Ondo. He attended Government College, Ibadan, a popular secondary school, starting in 1946 with Nobel Laureate, Wole Soyinka. Ibadan was a common denominator in his life, he returned to the city in 1964 to teach medicine at the university. He later became the medical school dean, attracting local and foreign support for the faculty. This offered him a vantage position in training successive generations of medical students.

Other national assignments came in succession. He was chair of the Joint Admissions and Matriculation Board, the body responsible for university admissions in Nigeria. He was also chair of the National Implementation Committee on Review of Higher Education. These, however, could not keep him away from Ibadan. He always returned to the city after each assignment. Akinkugbe later set up the Ibadan Hypertension Clinic for treatment of hypertension, his major interest as a medical doctor.

He chaired the planning committee that set up the Ondo State University in 1981 and also Federal Capital University, now University of Abuja, in 1983.

His death is an irreplaceable loss in the development of medicine in Nigeria. The country has also lost a teacher of medicine to several generations of Nigerian students, doctors, professors and vice-chancellors. This legacy will ensure that a good and worthy name in Nigeria's medical lexicon will never go away.

It's also a very deep personal loss. He was a like a father to me. For several years, he was the person I called my mentor, my role model extraordinary, my adviser, my teacher, my torchbearer, my arbiter, my social mobiliser, someone I called on when I faced difficulties, my referee for all positions I had sought since 1999. And someone who always worked for the good of people – and of the nation.

Indeed, a man of exceptional wisdom in medicine whose house in Ibadan became the “Aso Rock” - Nigeria's president official residence - for all practitioners seeking increased knowledge in the field of medicine.

When I was Vice-Chancellor of the pioneering University of Medical Sciences, Ondo, , Professor Akinkugbe was my boss. He was the chairman of the Governing Council of the university. He was invited to chair the council by the state governor then, Dr. Olusegun Mimiko, who felt the university needed his pre-eminence to grow its brand and lay a foundation for future growth.

He led the council with integrity and serenity, and brought in great wisdom, purposefulness and accountability. This pushed us to strive towards higher levels of effectiveness, transparency and accountability. He led by example, not ever asking for the luxuries of office that those in similar positions often prioritise over the real essence of the job to be done.

For me, of all the high profile university jobs he held during his lifetime, it is his leadership in founding the University of Medical Sciences - in his native city in Ondo - that was most endearing and most phenomenal. It will be remembered as one of his major contributions to the development of the field of medicine in Nigeria. His was a manifestation in exemplary leadership that can never be forgotten.

Professor Akinkugbe was a reliable and trust-worthy man who would go to any length to support anyone for whom he had a strong conviction.

I will miss him very much. He was one of the authentic builders of modern medicine in Africa. A great ambassador of Nigeria globally with his foray in some of the world's leading universities. Also a dependable role model and mentor and one of the most consistent advocates and promoters of good health for all Nigerians.

Friday Okonofua does not work for, consult, own shares in or receive funding from any company or organization that would benefit from this article, and has disclosed no relevant affiliations beyond their academic appointment.

By Friday Okonofua, Professor of Obstetrics and Gynaecology, University of Benin