Zimbabwe: On the edge again? 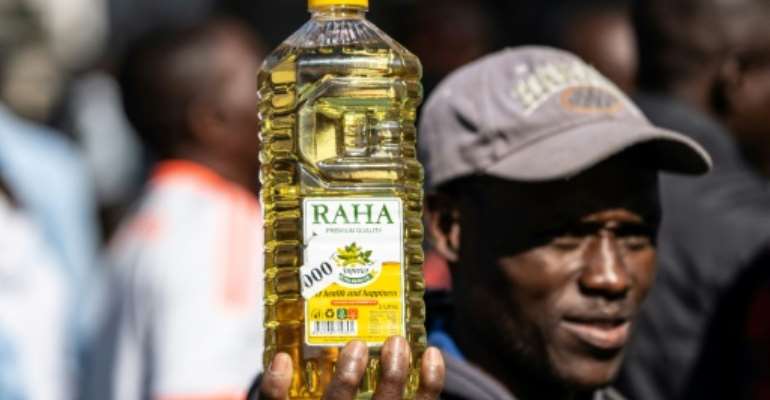 Inflation anger: A protester holds a bottle of cooking oil during a demonstration in Harare last August over the cost of food. By Zinyange Auntony (AFP)

A Zimbabwean shopper in a Harare supermarket shook his head, grumbling as he returned a loaf of bread to a rack after finding the price had jumped by a third and he could no longer afford it.

Nearby, a more than kilometre-long (half-mile) queue of cars waited for petrol at an empty fuel station in the hope it would receive a delivery.

Zimbabwe is being buffeted by its worst economic crisis in over a decade, including scarcity of basics like fuel and cornmeal.

Prices of basic goods gallop every week as the value of the Zimbabwean dollar continues to tumble, pushing official annual inflation to 785.6 percent in April.

A loaf of bread went up 36 percent last month and last week a 10-kilo (22-pound) sack of cornmeal jumped 30 percent.

On Wednesday, the price of fuel soared by up to 152 percent. A similar rise in January 2019 sparked countrywide demonstrations in which at least 17 people were killed. 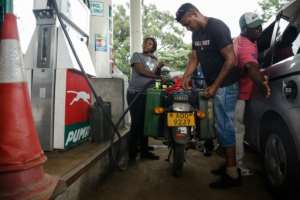 Fuel prices have soared again after Zimbabwe's currency plummeted in value under a forex auction system. By Jekesai NJIKIZANA (AFP/File)

"We are witnessing a relentless attack on our currency and the economy in general through exorbitant pricing models," Mnangagwa told his ZANU-PF party's politburo on June 10.

"This battle is being fuelled by our political detractors, elite opportunists and malcontents who are bent on pushing a nefarious agenda," he added.

"It has become apparent that among us there are wolves in sheep's clothing," he said last week.

In a dramatic move, and adding confusion to an already restless population, the government on Friday night suspended all mobile money transactions, the most widely used platform to make and receive payments in the crisis-ridden country.

It took the decision "to deal with malpractice, criminality and economic sabotage".

But in a notice, the largest operator EcoCash, defied the order, urging its more than 10 million users to continue transacting.

The hardship and chaos has spurred discontent among ordinary people.

The Zimbabwean authorities have in recent weeks targeted opposition activists and lawyers in what is seen as a tactic to strike fear into the population.

An opposition lawmaker and two party activists were last month abducted and then tortured by unidentified men, according to the victims, who spoke from the hospital where they were being treated.

Police later arrested the trio, accusing them of faking their abduction and torture.

Three weeks ago security forces suddenly heightened security, turning back cars and buses heading into the centre of the capital, spawning speculation about a possible looming coup.

Rumours of an impending coup were quickly dismissed at a rare press conference attended by the country's security service chiefs.

"There is no coup in the making," declared Home Affairs Minister Kazembe Kazembe.

University of Zimbabwe's political scientist Eldred Masunungure said the situation "points to volatility in the country, a comprehensively volatile situation both politically and in the economy where it's very visible as it affects the livelihoods of the vast majority of the people."

"Nothing points to stability, but I don't want to overstate this because we have reached this crossroads many times before and the country has not collapsed."

"The default position in the country is one of instability. It appears like the new normal," he said.

Economist Prosper Chitambara of the Labour and Economic Development Institute of Zimbabwe think tank said Zimbabwe was on the brink of another round of hyperinflation. 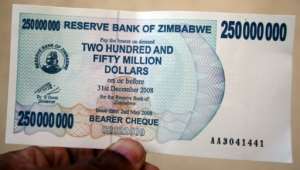 Land of millionaires: A bank note for 250 million Zimbabwean dollars, worth just US$1 when it was issued in May 2008. By ALEXANDER JOE (AFP)

The country's inflation breached the 500-billion-percent mark in 2008, forcing it to trash its own currency.

"We are headed for tough times with the loss of value of the local currency. The economy is not growing," said Chitambara.

"We are on the verge of hyperinflation. This increases economic uncertainty which is detrimental to private sector investment," he said.

The World Bank predicts Zimbabwe's economy will contract by 10 percent.