It's The State's Responsibility To Ensure Territorial Integrity: There Should Be No Panic In Volta 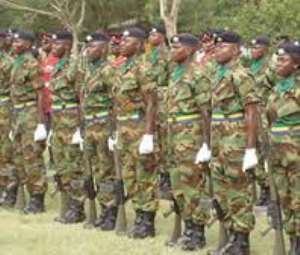 The National Security Agencies should not deploy only boots on the ground, but drones, military jet fighters, and apparatchiks helicopter gunships backed by paratroopers across all our borders.

All unapproved routes being used by aliens for infiltration to compromise our territorial integrity and dilute the sanctity of our electoral process must be blocked with uncompromising water tightness.

Those complaining of being harassed or intimidated by the presence of this security personnel in their neighborhoods should note:

The characteristics of a sovereign State comprise the key ingredient of protecting its territorial landmass to ensure uptimum security within its borders.

This move by the State must, therefore, be seen as a duty to protecting illegal infiltration of aliens and other cross-border crimes, as always happens when it's time for major registration exercises like NHI, voter registration and general elections.

I would, therefore, admonish my great in-laws of the Volta Region, particularly the Anlo State, not to allow these very congenital ndc hypocrites who flooded the streets of Accra with the nation's full military power backed by helicopters and armoured vehicles, when the verdict of 2012 election petition was going to be announced, to deceive you, please.

And for the records; nobody will prevent a Ghanaian residing in Togo to come home as and when he/she wishes. The deployment of military personnel along our frontiers with Togo is to curb illegal enteries through unapproved routes.

On the question of people having their bedrooms in Ghana with their living rooms across the border in Togo, doesn't make such individuals automatic dual citizens of these neighboring countries.

Indeed, dual citizenship is conferred on an individual by law so the fact that a person resides along the Ghana-Togo border doesn't empower him/her to partake in electoral processes of both countries.

As a matter of fact, I once lived in a Swiss town called Gumois in Canton Jura. This town is divided by a tiny stream on which is a wooden plank and one side of the plank is France while the other is Switzerland.

So in this little Alpine town, there is Gumois Swiss and Gumois France but residents of each side never meddle in other's national affairs like voting etc.

Personally, I have never been able to wrap my head around why in Africa, there's this notion that when a person resides in a border town, then he/she is an automatic citizen of both countries.

I think we should raise the bar in our critique of such matters which border, purely, on law, and not emotional sentiments.