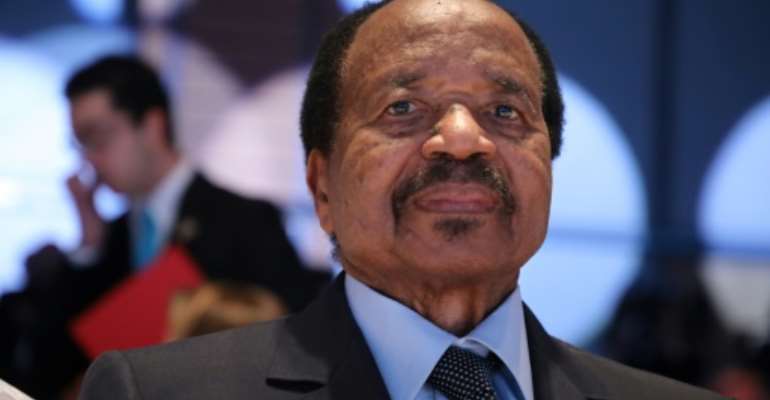 Paul Biya has ruled Cameroon with an iron fist for 37 years. By Ludovic MARIN (AFP/File)

Buffeted by security and political crises and embarrassed by military blunders, Cameroon's government has been forced to give ground on human rights under intense pressure from campaigners and the UN and from allies who once chose to overlook its flaws.

NGOs have long denounced abuses in the central African country, from the detention of journalists and arrests of opponents to the killings of civilians by soldiers.

But after a massacre by security forces and the death of a detained journalist, the international outcry has been so loud that President Paul Biya, in power since 1982, has been forced to make U-turns.

Three soldiers were charged this month with murder over the February killing of 10 children and three women in western Cameroon. The UN says at least 23 civilians had died.

Resentment is rising among the English-speaking minority in Cameroon. By (AFP)

The military had denied the killings for two months, blaming the deaths on fuel containers that had accidentally exploded during a firefight between security forces and anglophone separatists.

The investigation and prosecution of the soldiers mark an unprecedented step by a regime deaf to such accusations for decades.

From now on, "it will be difficult for the regime to resist international pressure," said Cameroonian political scientist Ambroise Louison Essomba.

The government "has every interest, for its own survival, to closely study this question of human rights", said another analyst, Jacques Ebwea.

The pressure is mounting as Cameroon is battered by violence: in the north, where attacks by Boko Haram jihadists are on the rise, and in the west where a three-year separatist revolt rages on, rooted in resentment among the English-speaking minority in the francophone-majority country.

Violence between anglophone separatists and security forces has claimed more than 3,000 lives and at least 700,000 have fled their homes.

Although rights monitors emphasise that abuses have been committed by both sides, the armed forces have become mired in a series of high-profile atrocities.

Under pressure from NGOs, the United Nations, the United States and France -- the country's former colonial ruler and a close ally -- Biya announced an investigation into the February killings, which found that the "uncontrolled" soldiers had tried to hide their crime and falsified their reports.

The armed forces have become mired in a series of high-profile atrocities. By MARCO LONGARI (AFP/File)

The United Nations welcomed the "positive step", but demanded that "all those responsible" for the killing be brought to justice.

"There are more and more convictions, but unfortunately they are slow to produce the desired result, which is to establish a true rule of law," said Ngo Mbe.

In another high-profile case, seven soldiers are on trial for the execution-style killing of two women and their babies in the Far North, a region abutting Nigeria where Boko Haram jihadists fighters have carried out brutal attacks on civilians.

The atrocity was filmed and shared on social media.

The government had initially dismissed the images as fake before -- under international pressure -- changing position and arresting the seven.

On top of those conflicts, Cameroon has been experiencing an unprecedented political crisis since Biya -- who is 87 years old and has ruled Cameroon since 1982 -- was re-elected in 2018.

His challenger and main opponent, Maurice Kamto, and hundreds of his supporters were arrested shortly after the elections.

They spent nine months in prison without trial before being released in October 2019, again after strong international mobilisation.

"The international community's interventions inconvenience the regime... but very often only at first, and very little over the long term," said Christophe Bobiokono, a member of the National Commission for Human Rights and Freedom, a government institute.

Local and international NGOs announced in early June that anglophone journalist Samuel Wazizi, who had been arrested ten months earlier, had died in detention at the hands of the military after being tortured.

The army finally acknowledged the death but denied the allegations of torture, claiming that he had died of severe sepsis less than two weeks after he was arrested on a terrorism charge.

Wazizi's family said they were never informed of his death.

NGOs immediately called for an independent investigation, and hours later the French ambassador announced to the press that Biya would launch a probe after the two had met to discuss the death.

The press watchdog RSF ranks Cameroon 134th out of 180 countries and territories in its 2020 World Press Freedom Index, three places lower than the previous year.