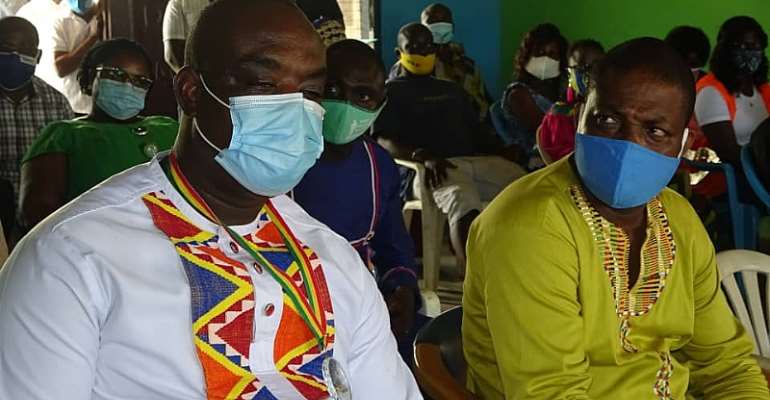 The NPP Member of Parliament for Gomoa East, Hon. Kojo Asemanyi is seriously advocating for Members of Parliament in the three Gomoa Constituencies to be given another term of office to complete their development agenda

According to Hon. Kojo Asemanyi, since the three MPs were first-timers, there was the need for the people in Gomoaland to rally solidly behind them and NPP party as a whole for another term

" For the first time in history, NPP won all the Three Parliamentary Seats in Gomoa during 2016 general elections and are represented by Hon. Alexander Kom Abban for Gomoa West, Hon. Naana Eyiah for Gomoa Central and my humble self Hon. Kojo Asemanyi for Gomoa East.

Hon. Kojo Asemanyi noted that Gomoa had been left out in terms of development till the NPP Government came to power in January 2017

" Today, Gomoa is not the same as it was some three years ago. Massive infrastructure development are dotted all over the communities thus improving the lives of the people

Fortunately, our party has endorsed us to represent respective constituencies as Parliamentary Candidates for the December General Elections

Hon. Kojo Asemanyi stated these when he paid a courtesy call on Omanhene of the Gomoa Ajumako Traditional Area, Obrempong Nyanful Krampah XI at Gomoa Ajumako in the Gomoa West District of the Central Region to seek for his blessings

It is also meant to introduce myself as the NPP Parliamentary Candidate for Gomoa East for the upcoming December 7 Presidential and Parliamentary Elections.

I cannot start visitations without the consent of Gomoa Nananom

Parliament is mainly based on experience. The number of years spent in the Parliamentary House gives you more experience and the know-how to serve your people better.

Hon. Kojo Asemanyi recounted unflinching support they were enjoying from Nananom and the good people in the constituencies pledging to ensure total development to eradicate poverty-related hardships associated with the Gomoa Communities

Omanhene of the Gomoa Ajumako Traditional Area, Obrempong Nyanful Krampah XI congratulated the three MPs for winning their primaries to retain their seats

"Gomoaman made up of Gomoa Ajumako and Gomoa Akyempim Traditional Ares are solidly behind you. You really made Gomoa Proud.

For the first time in history, NPP won all the three constituencies. It's unprecedented. Your performance as MPs in your various constituencies will speak for itself

High Court shoot down Agordzo's application to travel
39 minutes ago

ASEPA to file RTI request for minutes of Justice Dotse-AG 'S...
39 minutes ago