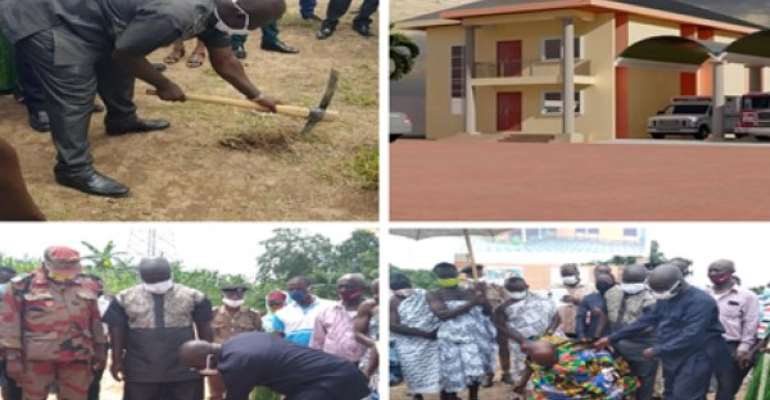 The Asante-Akim South Municipal Assembly has performed a groundbreaking ceremony for the commencement of work on a new assembly block and a fire station at Juaso, the Municipal capital.

For many years, the people of Asante-Akim South have been yearning for a fire station after relying on the Asante- Akim Central Fire Station which also serves Asante –Akim North and Bosome Freho Districts.

Also, the people in the Municipality have been accessing services of most government agencies in the Asante-Akim Central Municipality due to lack of adequate office accommodation for such agencies.

It is for these reasons that Municipal Chief Executive (MCE), Mr. Alexander Frimpong, and Member of Parliament (MP), Mr. Kwaku Asante-Boateng teamed up to lobby for the two projects to improve service delivery in the Municipality.

The assembly block is being funded from the District Assemblies Common Fund (DACF) while the District Performance Assessment Tool (DPAT) is the source of funding for the fire station project.

The brief but impressive groundbreaking ceremony was witnessed by selected chiefs, some assembly members, and staff of the assembly.

Mr. Frimpong said the two projects were critical to quality service delivery in the Municipality and their completion would mark the departure from locals commuting between Konongo and Juaso to access basic services.

He said it was unacceptable that even after elevating the district to a municipality, it still depended on another municipality for certain essential services.

The situation, he said, left the assembly helpless in intervening for the people in the event of infractions on the part of service providers because they were outside the assembly's jurisdiction.

He called for speedy completion of the projects and further urged the contractors to deliver quality work to ensure value for money.

Mr. Asante-Boateng said the projects were fruits of the unity and collaboration between him and the MCE and entreated all stakeholders to rally behind the two for accelerated development of the Municipality.

The MP who was recently retained by delegates of the New Patriotic Party (NPP) as the parliamentary candidate, pledged his commitment to lobby for more development projects to improve the lives of the people.