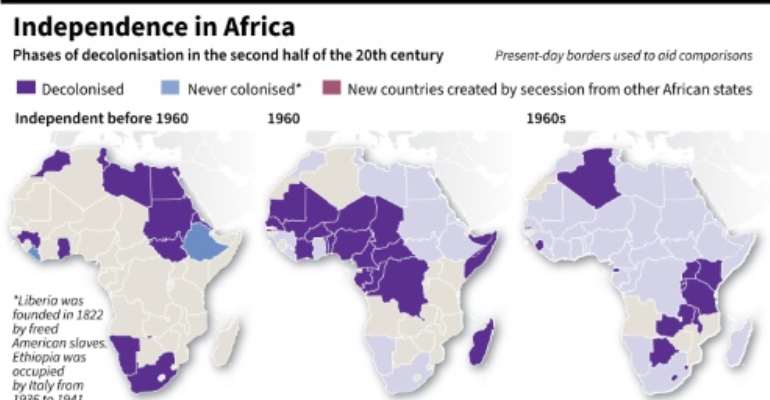 Key dates in the history of Madagascar since independence from France 60 years ago on Friday.

Tsiranana faces popular anger over his perceived subservience to France.

In 1972 protestors set fire to city hall in the capital Antananarivo, the start of a popular uprising that is repressed with the loss of 40 lives.

The demonstrations force Tsiranana to resign, bringing an end to the country's first republic as he hands over to an army general, Gabriel Ramanantsoa.

In 1975 a socialist constitution is installed and Didier Ratsiraka becomes president.

General strikes paralyse Madagascar. Hundreds of thousands of people rally for months in 1991 in peaceful protests.

The opposition occupies ministries and establishes a transitional authority led by Albert Zafy.

The situation turns violent when guards open fire on a march at the presidential palace. More than 100 people are killed.

In 1992, a new constitution puts an end to the unrest. A year later, Zafy wins the presidential election but in 1996 is impeached for violating the constitution.

In elections the following year, Ratsiraka returns to power.

Battle for the presidency

After a nearly seven-month crisis, Marc Ravalomanana, a millionaire dairy mogul, is declared winner of presidential elections in 2002 against the outgoing Ratsiraka, who disputed the results.

Ravalomanana is reelected in 2006.

In March 2009, Antananarivo mayor Andry Rajoelina seizes power from Ravalomanana with the backing of the military.

The international community denounces what it deems a coup and for nearly four years foreign aid and investment are frozen, driving the island deeper into poverty.

In September 2011, the main political factions draw up a roadmap to guide Madagascar to elections.

In December 2013 with the support of the outgoing regime, Hery Rajaonarimampianina wins presidential election, taking over at the start of 2014.

Neither Ravalomanana nor Rajoelina ran against him, amid fears abroad that this would reignite political turmoil.

In June the Constitutional Court throws out the impeachment demand.

Protesters hit the streets of Antananarivo again in April 2018 over Rajaonarimampianina's efforts to change electoral laws that opponents say are intended to favour his party.

The crisis ends with the creation of a consensus government to stage polls by year's end.

In January 2019 Rajoelina is declared victor of the December presidential election as a top court throws out accusations of fraud by rival Ravalomanana.

In April 2020, Rajoelina launches a local herbal concoction claimed to prevent and cure the novel coronavirus.

The World Health Organization (WHO) has repeatedly cautioned that the brew needs to be clinically tested to support such claims.