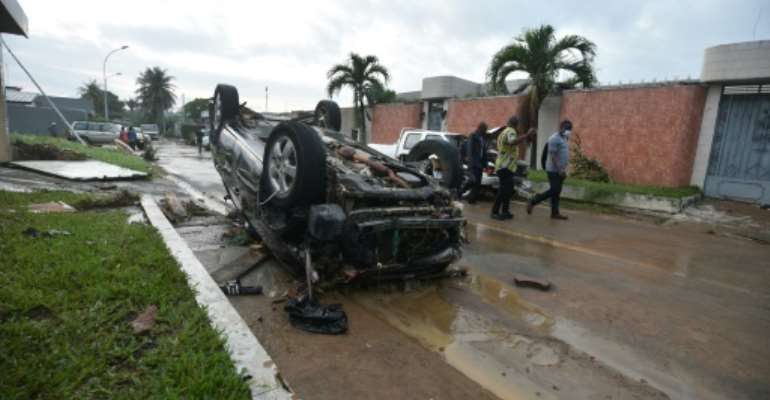 The floods in Ivory Coast's economic capital Abidjan flipped cars and destroyed houses, then were gone as quickly as they came. By SIA KAMBOU (AFP)

The city's firefighters said that two people died in the devastation, but a journalist said he saw the body of a third victim.

"In half an hour, the water rose a metre and a half (five feet). We had to take refuge on the roof of our house as a torrent ran down the street," journalist Thomas Diego told AFP.

His production company is located in the wealthy eastern area of Cite Reconciliation, which -- along with neighbouring Cite Allabra -- was covered with mud as the floodwaters swept away cars, leaving some overturned.

Cite Reconciliation's four-metre-high metal entrance gate was torn off and taken away, while the walls of houses collapsed and a streetlight fell onto one home.

The three-hour downpour hit in the middle of the day and by the afternoon residents armed with brooms and mops were trying to inspect and hopefully fix the damage.

"Everything is ruined inside," said one resident Acket.

"We don't know where to go now, we can't sleep in the house, we turn to God," lamented another, Kevin Brou. 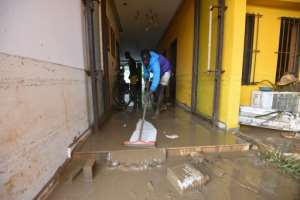 Landslides and floods are common during Abidjan's rainy season. By SIA KAMBOU (AFP)

The fresh blow to the West African country's economic capital comes after 16 people were killed in a mudslide following heavy rains on Thursday last week.

Landslides and floods are common during Abidjan's rainy season, wreaking havoc on shantytowns built into eroding hillsides in the undulating seaside city.

The rainy season in the city, which is home to some five million people, began in May and normally lasts until the end of July.

Eighteen people died in Abidjan during flooding in June 2018.

Following those floods, the authorities destroyed the housing in the most vulnerable parts of the city where people had built homes wherever they found the space to do so.

In the working-class area of Adjame-Williamsville on Thursday, street traders said they barely had time to collect their goods and flee the rising water.

But 30 minutes after the deluge, the traders had their wares back on the streets, amid a dissipating sea of garbage, with the wet trunks of trees still showing how high the floodwaters had reached.