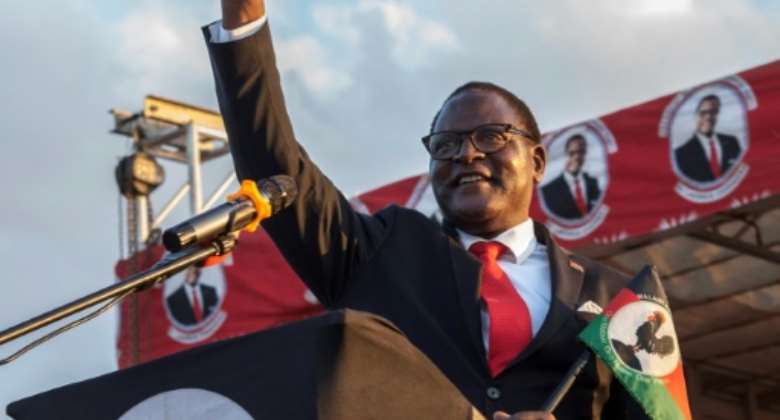 Malawi's opposition leader Lazarus Chakwera appeared to be heading for victory Thursday, in a re-run of a presidential vote that was scrapped over massive irregularities, unofficial tallies showed.

Voters went to the polls on Tuesday for the second time in 13 months to elect a president after the Constitutional Court ordered fresh elections in a historic vote seen as a test for democracy in the southern African country.

Results compiled from the 5,002 polling centres and tallied by the public broadcaster MBC gave Chakwera a dominant 60 percent lead, with incumbent President Peter Mutharika on 39 percent.

"Unofficial results as reported by MBC reporters spread across all districts of the country put ... Dr. Lazarus Chakwera in the lead," said the broadcaster on its Facebook page.

Mutharika, in power since 2014, won 38.5 percent of last year's discredited vote in which Chakwera garnered 35.4 percent. The court found that election to have been fraught with widespread irregularities, including smudging of result sheets with correction fluid.

Appealing for patience and calm, electoral commission chief Chifundo Kachale on Thursday said the results would be declared within the next two days because they were meticulously going through each and every result sheet from the thousands of polling stations.

"All things being equal, between 36 to 48 hours we should be able to conclude the assignment," said Kachale.

He said in the light of the annulment of the last election the commission would try to be "as thorough as we can".

The cancellation of Mutharika's victory last year made Malawi just the second country south of the Sahara to have presidential poll results set aside, after Kenya in 2017.

The cancellation of Mutharika's victory was historic as it made Malawi just the second country south of the Sahara to have presidential poll results set aside. By AMOS GUMULIRA (AFP/File)

Former president Joyce Banda, who threw her support behind Chakwera in the nine-party electoral alliance, told AFP she was "proud to have been part of history in the making in my country".

"Africans are demanding accountability, transparency and observance of the rule of law from their leaders, and I feel sorry for those that don't realise that times have changed, and those ignoring the voices of ordinary people are doing so at their own peril," she said.

Mutharika's party has threatened to reject the outcome of the vote.

"If Dr. Chakwera had won the election fair and square I would have congratulated him, but unfortunately that is not the case," said Atupele Muluzi, one of Mutharika's main electoral alliance partners.

"The election results that are circulating are illegitimate and I will not accept the outcome," he said.

A grouping of local election observers on Thursday commended the new electoral commission, appointed two weeks ago, for the transparent vote counting.

"This goes a long way in mitigating fears of rigging," said the grouping which includes influential religious organisations.

Akuffo-Addo's reaction to calls for a reshuffle is disappoin...
24 minutes ago