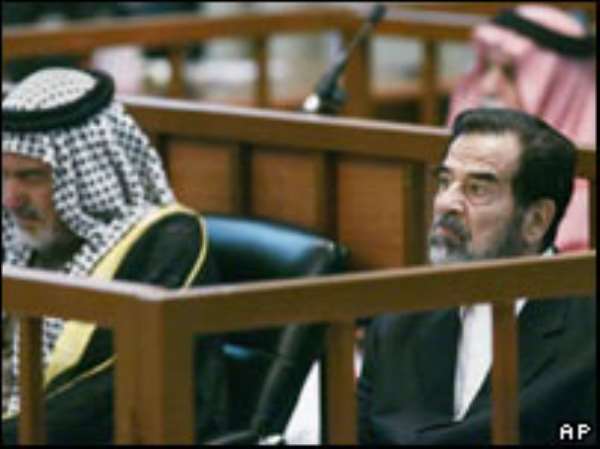 Former Iraqi leader Saddam Hussein and his lawyers have said they will boycott his trial until security is improved and other demands met.
Closing defence arguments were due to start in the court on Monday but Saddam and some co-defendants and defence lawyers failed to appear.

In a letter to the court, Saddam criticised the trial which he said was driven by "malicious" US desire.

Saddam and seven co-accused deny charges of crimes against humanity.

The prosecution has demanded the execution of Saddam and two others for the deaths of 148 villagers during a crackdown in the village of Dujail after an assassination attempt on Saddam in 1982.

Saddam's letter was made public as the court began hearing the first closing arguments for Ali Daeem Ali, a former Baath party official in Dujail and a minor defendant in the case.

"The tribunal is lacking in all procedures established by international and Iraqi law," read the former president's letter.

"For this reason, it seems there is a wish to condemn us for malicious American intentions, supported by collaborators in Iraq."

Saddam signed the letter "president and commander-in-chief of the sacred armed forces".

Chief Judge Raouf Abdel Rahman opened the session by expressing his regret for the killing last month of Khamis al-Obeidi, one of Saddam's chief lawyers.

"The court strongly condemns any attack against lawyers or against any of those working in this court," he said.

Lawyer Najib Nueimi, speaking to the Associated Press news agency from Qatar, said the boycott would continue until the lawyers and their families were given better protection and an investigation was opened into the killing of Mr Obeidi.

The lawyers have also requested an adjournment to allow more time to prepare their final arguments, following disruption caused by Mr Obeidi's death and security fears.

"We have all gotten threats," Mr Nueimi said. "What do you expect us to do? Lawyers have closed down their offices and gone into hiding and taken their families to Jordan."

Judge Abdel Rahman said he had received the defence lawyers' requests but dismissed them, AP reports.

He said lawyers had been appointed by the court to replace those who were absent.

The final defence statements are expected to last two or three days, after which the judges will consider their verdict.

The prosecution made its final statements on 19 June, calling for the death penalty for Saddam Hussein, his half-brother Barzan al-Tikriti and former vice-president Taha Yassin Ramadan.

The defendants deny being responsible for the deaths of the Shia Muslim villagers during a crackdown in the village of Dujail.

The defence has argued the crackdown was a legitimate action against those planning to assassinate the head of state.

As well as the deaths of the lawyers, the trial has been marred by the resignation of one chief judge and international criticism of its standards.

Saddam Hussein and six others will face another trial starting next month charged with genocide over a campaign against Kurds in the 1980s.