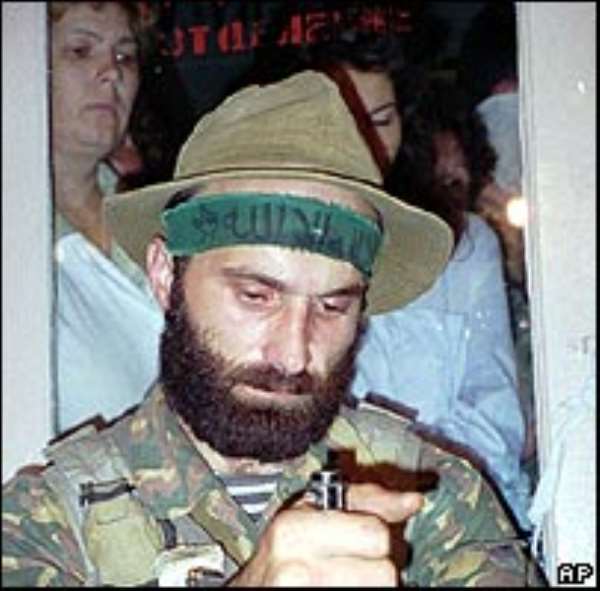 The most wanted Chechen rebel warlord, Shamil Basayev, died when a lorry carrying explosives blew up in Ingushetia, near Chechnya.
A pro-rebel website said three other militants died with Basayev in the "accidental" explosion. It denied that Russian forces were involved.

President Vladimir Putin said his death was "deserved retribution" for rebel attacks, including the deaths of more than 300 during a school siege.

The September 2004 attack on a school in Beslan, in the North Caucasus, led to at least 331 deaths. It triggered outrage in Russia and other countries, as many women and children were among the victims.

The pro-rebel Kavkaz-Center website, citing a member of the rebel parliament, said Basayev had died "a martyr" in the lorry explosion on Monday near the village of Yekazhevo in Ingushetia.

The BBC's Damian Grammaticas in Moscow says Basayev has been top of Russia's most-wanted list for a long time.

Mr Patrushev was shown on Russian television briefing President Putin on the killing of Basayev.

The FSB chief said he was among a group of militants killed as they prepared to carry out a "terrorist act" in Ingushetia, which borders on Chechnya.

"This was made possible because of our operations abroad, primarily in countries where weapons were obtained and then sent on to Russia, where the terrorism was carried out," he told Mr Putin.

The Russian president said "this is the revenge the bandits deserve for our children in Beslan, for Budyonnovsk, for all the acts of terrorism they have committed in Moscow and in other regions of the Russian Federation, including Ingushetia and the Chechen Republic".

He announced awards for the Russian special forces involved.

Earlier on Monday, Russian media reported that a lorry packed with explosives had blown up during a "special operation" against militants. Four militants were reported killed in the incident.

"All his distinguishing features were found," Interfax news agency quoted him as saying.

He said there were no casualties among Russian security forces, but two civilians were injured in the operation.

Akhmed Zakayev, a Chechen rebel envoy in Britain, said the killing of Basayev "will in no way" change the situation in Chechnya.

"As long as a mutually-acceptable relationship has not been established between Russia and Chechnya, there cannot be a lasting peace," Mr Zakayev told Russia's Ekho Moskvy radio station.

Russia had previously offered a reward of $10m (£6m) for the capture of Basayev.

He claimed responsibility for masterminding the Beslan raid, but blamed the children's deaths on Russian forces, who stormed the school to end the siege.

Basayev led the first mass hostage-taking by Chechen rebels - in the southern Russian town of Budyonnovsk in 1995. He also claimed to have organised the assault on a Moscow theatre in 2002, during which 129 people died.

He was a key commander of the resistance after Russian forces invaded Chechnya at the end of 1994.

When Russia was forced to withdraw its forces after the first Chechen war ended in 1996, Basayev stood for president, but came second to Aslan Maskhadov - the more moderate separatist leader killed by Russian troops in March 2005.

Basayev also served briefly as prime minister in the self-proclaimed independent Chechen republic of Ichkeria in 1997.

Hottest Photo Reports
Catch up with all the political quotes from our politicians.
Advertise here
More Europe
ModernGhana Links
Carlos the Jackal asks French court to shorten life sentence
Gare du Nord to get minor upgrade instead of huge facelift amid row over cost blowouts
French study warns of the massive scale of Chinese influence around the world
Macron and Modi vow to join forces in Indo-Pacific amid submarine row
Canadian PM Justin Trudeau thanks his supporters after narrow win for third term
Deliveroo France food delivery company to go on trial for ‘undeclared labour’
Macron snubs UN assembly in latest show of French fury over submarine 'betrayal'
20 years after Toulouse blast, workers and victims at odds over responsibility
Belgian artist Jan Fabre to face trial on charges of sexual harassment
TOP STORIES

Full statement: Provisional results of 2021 Population and H...
43 minutes ago

Come for land, we want Akpeteshie factory as 1D1F – Asebu Pu...
46 minutes ago