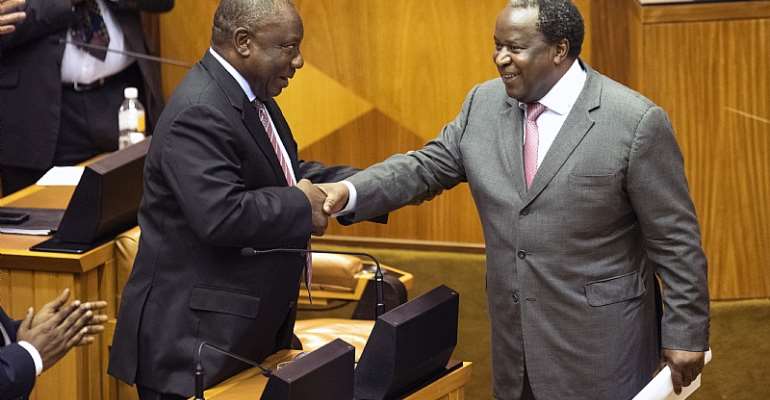 The COVID-19 pandemic has not only generated a far-reaching social and economic crisis in South Africa, but is also exposing two major fault lines in the society.

First, the pandemic has starkly exposed the country's high levels of inequality. Every way in which South Africa is unequal has been exacerbated by the pandemic. Those with high-paying office jobs have largely been able to work and earn an income from their homes. Those in low-paying, precarious work have lost their jobs and income, or have been forced out to work. These same workers have to risk infection on public transport and in crowded shops. Children at private schools continue learning online, while the vast majority of learners in the public system have not had any schooling for almost three months.

Second, the pandemic has exposed the deep gender inequalities in the country. Not only has South Africa continued to experience the most abhorrent forms of gender-based violence under the lockdown, but the pandemic has also exposed the deep gender-based inequality in both paid and unpaid work. Women are having to bear a disproportionate responsibility for unpaid care work, while at the same time bearing a heavy burden for job and income losses in both the formal and informal economies.

Any economic policy proposals from government would have to address these inequalities if the country were to emerge from the pandemic with a more equal and fair society, and a more resilient economy. The budget is one of the key tools that government has to effect meaningful change, though it can't address all these problems on its own. Of course, the rebuilding is a long-term process, but the budget is a key starting point.

In many of its pronouncements on managing the economic fallout from the pandemic, the government has emphasised its intention to forge a new economic growth path that would address the high levels of inequality in South Africa. Indeed, in a recent speech President Cyril Ramaphosa outlined his vision for a new economy thus:

We must transform and restructure. We are operating under an economy both colonial and racist. We need a reset of the economy for inclusive growth. We need an economy that responds to poverty. We can't countenance 10 million people out of work.

How does the supplementary budget announced by Finance Minister Tito Mboweni move South Africa towards this objective? And what can be learnt from the budget about government's plans to seriously work towards such a new economy?

To be fair, it is not the sole job of the finance minister to address inequality. However, the budget of the government, which is his responsibility, should provide a strategic financial framework for prioritising the key objectives of government. Sadly, we are of the view that there is very little in the budget he set out this week that creates a pathway to a better, more equal economy.

We don't deny that the financial and fiscal challenges which face South Africa are immense. There are no simple solutions. However, the budget needs to balance competing and sometimes incompatible imperatives:

In addition, the budget should indicate how the fiscal consolidation plan will address the major inequalities in the country. It should also show how the adjustment will affect the country's ability to address key social and economic challenges, in both the short and the long term.

There are three main messages in the supplementary budget .

First, the narrower measure of the budget deficit for 2020/21 has, as a result of COVID-19, shifted from 6.8% of the gross domestic product (GDP) to 14.6% of GDP. Government had, in the original 2020/21 budget, projected its revenue for the fiscal year to be R1.398 trillion. As a result of the shutdown and lower economic growth, government now expects revenue to be R1.099 trillion – a shortfall of almost R300 billion. Expenditure , on the other hand, which was initially projected at R1.766 trillion, is now projected to be R1.809 trillion – an increase of about R44 billion. The net result is that the deficit, originally expected to be R368 billion, is now estimated to be R709 billion.

Second, within the current fiscal year, government has cut R101 billion from various budget lines, and reallocated R145 billion worth of expenditure for COVID-19 measures – hence the R44 billion of net additional expenditure.

Third and most strikingly, government plans to have a primary budget surplus (that is, the difference between revenue and expenditure before debt payments) by 2023/24, in order to deal with its growing debt.

This raises two important questions. The first is why it is necessary at all to have a primary surplus in the budget. An obsession with balanced budgets dates back to the Thatcher/Reagan era of the 1980s . But there are many compelling arguments for why it is not necessary for a government ever to run a balanced budget. The austerity measures required to balance a budget can inflict permanent economic damage on the poorest and most vulnerable citizens, and deepen inequality.

Second, how will this surplus will be achieved, and at what cost, to whom? The indications are that the budget will be balanced through significant cuts in expenditure (rather than rapid revenue growth), projected at R230 billion in 2021/22 and 2022/23, and even further in 2023/24. Unfortunately, we are not provided with details on where these cuts in expenditure will occur. But there is little doubt that they will disproportionately affect those dependent on state services.

There is little in the 2020 adjustment budget to suggest that the government is serious about building a fairer economy which addresses the already high levels of inequality. Essentially, we have been told to wait until the October mid-term budget, and the 2021 annual budget, to see the detail about how the government will achieve its goals.

On the basis of what has been said (and not said) in the supplementary budget, we can expect inequality to rise significantly. Government expenditure is progressive and significantly reduces the levels of inequality in our society. Cutting expenditure at the magnitude planned will certainly lead to higher levels of inequality. Moreover, because of the nature of social spending, the impact of spending cuts will fall disproportionately on women.

There are two very worrying aspects of the desire to run a budget surplus. The first is that spending cuts required to achieve it are extreme, and contrary to the expansionary fiscal policy being adopted by many countries around the world. The second is that there is little information in the adjustment budget about who will bear the brunt of these cuts. This matters for inequality.

If government is serious about addressing inequality and building a less unequal economy, what should the budget do? Inequality cannot be addressed without an active economic strategy that:

There is, unfortunately, very little in this supplementary budget to suggest that government has an economic strategy to lower inequality in South Africa.

David Francis works at the Southern Centre for Inequality Studies which receives funding from international foundations that fund research.

Imraan Valodia receives funding from a number of local and international organizations that support research.

By David Francis, Deputy Director at the Southern Centre for Inequality Studies, University of the Witwatersrand And

Imraan Valodia, Dean of the Faculty of Commerce, Law and Management, and Head of the Southern Centre for Inequality Studies, University of the Witwatersrand

New Voter Roll: Omission Of Names Was Deliberate, Not A Mist...
8 hours ago